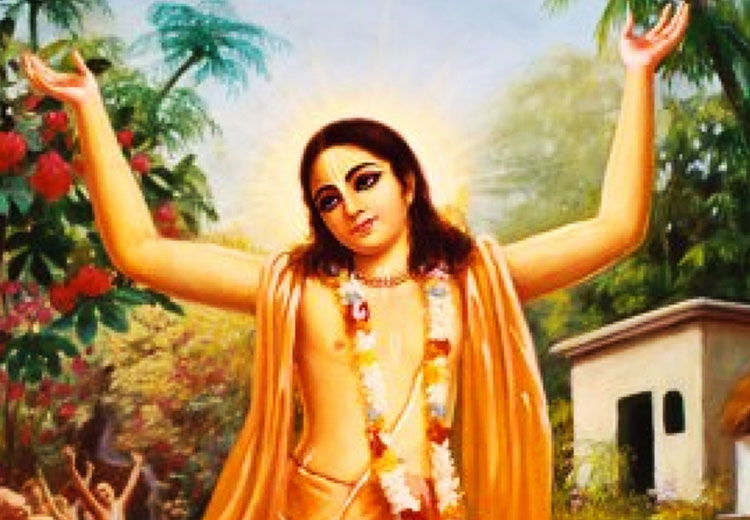 Shri Chaitanya Mahaprabhu was born on 4th February, 1486, at Mayapur in Navdwip, West Bengal, 75 miles away from Calcutta in Nadiya district on the banks of river Ganga. His father’s name was Jagannath Mishra and mother’s name was Shachidevi.  He was the tenth child of his parents. He had eight sisters and one brother elder to him but all the eight sisters died in childhood itself whereas elder brother Vishveshwar renounced the material world at the age of sixteen. Shri Chaitanya’s father had named him Vishvambhar, whereas his mother used to call him Nimai. At the time of Upnayan (investiture with the sacred thread), because of his beauty, he was named Gaurang (fair body) and later, he was named Shri Krishna Chaitanya. He was a great devotee of Krishna. People believe him to be incarnation of both Krishna and Radha in one physical body. Vaishnavas of Bengal see him as the real form of God.

Just like Shri Krishna, Shri Chaitanya was also very naughty in his childhood. But just as no one could be angry with Krishna in spite of his naughtiness, similarly no one could get angry with him even if they wanted to do so and instead were so impressed with his personality that they lovingly kept starring at him. Once while he was reciting along with music, an old learned man passed by but his singing was so hypnotic that he forgot everything and started reciting along with music and dancing with other kids.

Since childhood, Shri Chaitanya never believed in the caste system. He believed that having external sanctity is untrue. Once while he was five years old, he started crying. When asked as to what he wanted, he said that he wanted to eat the Prasad (food offered to God) that Jagdish and Hiranya had cooked for God. Jagdish and Hiranya were the devotee Brahmins who were fasting on the occasion of Ekadashi and they had made the Prasad to offer Shri Krishna.  With this demand of Shri Chaitanya, they felt as if Shri Krishna in the form of the child was asking for the Prasad and considering him Balgopal (young Krishna), they offered him the Prasad.  Years after, these two Brahmins became famous as the greatest devotees of Shri Chaitanya.

Shri Chaitanya was very clever in studies. At the age of nine, he was investitured with the sacred thread. Sometime after his investiture, his father Shri Jagannath died. After his father’s death, all the responsibilities came on to his mother’s shoulder and she started sending him to Pandit Gangadaas for education. Later he took education from Shri Vasudev Acharya too. Since his schooling time, Shri Chaitanya started debating with scholars and had created very good image.

At the age of sixteen, Shri Chaitanya started his own educational institute. Though he was the youngest teacher in Nadiya, because of his knowledge, many students came to him. Around this time, Shri Chaitanya got married to a girl named Lakshmi. Lakshmi’s father Vallabhacharya was a judge.

Shri Chaitanya once went on to a tour to the eastern region for debate. He defeated many scholars in debate while on tour. Wherever he went, great Pandits honored him. On this tour, an old Brahmin named Tapan Mishra bowed to him, calling him the incarnation of God. Tapan Mishra was probably the first person who had recognized Shri Chaitanya as a reincarnation.

After sometime, for the salvation of his ancestors, Shri Chaitanya went to Gayaa for Pind-daan. There, he met a saint named Ishwar Puri who consecrated Shri Chaitanya with Shri Krishna mantra post which his life totally changed. His excitement for learning disappeared and Lord Krishna’s love replaced it. He used to laugh, cry in Krishna’s love and call out loudly for Krishna. This way, he started living each second of his life for Krishna. Some people thought him to be mad whereas some who were true devotees thought him to be a form of God. Of these, the chief names are devotees like Advait Acharya and Shri Vas who believed Shri Chaitanya to be the incarnation of God.

Just as Shri Chaitanya’s devotion got stronger, more and more devotees joined him. Of this, the first and foremost devotee was Shri Nityanand Prabhu who had come to him with the inspiration of Shri Ishwar Puri. Shri Puri had told him that if he wanted to have a glimpse of Shri Krishna, he must go to Nadiya and it so happened that the moment Shri Nityanand Prabhu saw Shri Chaitnaya he could see Shatbhuj (six hands) Narayan in him. Of his early devotees were Advait Acharya, Pundarika, Muslim Bhakt Haridas, Shri Dhar, Murari etc.

With the influence of his divine virtues, many wicked hearts became his disciple. Chief of these were two policemen named Jagai and Madhai who were drunkards and wicked but later, they became greatest devotees of Shri Krishna. The Kaazi (a Mohammedan judge) of that region who was a staunch Muslim, after initial opposition, came in to Shri Chaitnaya’s refuge.

At the age of 24, Shri Chaitanya got his initiation to renounce by a saint named Keshav Bharti. Mahaprabhu adopted renouncing to get closer to God, renunciation was necessary and his intention was to bring about Sanyasis (ascetics) of Kashi and other pilgrimages on to the path of devotion. After renunciation, he started his journey towards Vrindavan but lost his way and reached Shantipur where Advait Acharya lived. From there, with his mother’s permission, Shri Chaitanya along with his chief disciples Nityanand, Mukund, Jagadanand etc. went to Shri Jagannath Puri. Here, the great Pandit of Puri region, Sarvabhaum was impressed with his devotion and became his disciple and as Shri Sarvabhaum became his disciple, so did the entire Pandits of Puri region. This way Shri Chaitanya’s faith spread all over Orissa.

Shri Chaitanya travelled all of South India from Setubandh to Kanyakumari and returning via Madhya Pradesh, reached Puri. During this journey, Shri Chaitanya made governor Ramanand Roy of Vidyanagar located to the east of present-day Rajahmundry, his disciple. During this journey, Shri Chaitanya found “Brahma-Sanhita’s manuscript in the Aadi-keshav temple at Tiruvattar in Travancore state and he made a copy of it and carried it with him. “Brahma- Sanhita” is the essence of all the granths of Vaishnavas. On this journey, he also got a copy of the great book, “Krishna-Charanamrit” in Dwarka.

During his stay for three years in Puri after returning from pilgrimage, Shri Chaitanya set for his journey to Vrindavan. In those days, on the way to Vrindavan, the region of Chotanagpur (Jharkhand and surrounding area) was full of dense forest and wild animals. Along with Shri Chaitanya, there was only one person named Balchandra Bhattacharya. This journey was very dangerous. But it is said that when Shri Chaitanya entered the jungle reciting Shri Krishna’s name, all the animals like elephant, tiger and all started reciting along with singing and dancing to the tunes of Krishna’s name.

Shri Chaitanya reached Vrindavan via Banaras where he was so overwhelmed with devotion that he forgot all about himself. Many a times it so happened that he fainted out of love for Shri Krishna. It is said that seeing the river Yamuna he was so overjoyed that he immediately jumped into the river. With his presence the cows and other animals of the area behaved as is someone of their own had returned.

Amassing the people of Mathura –Vrindavan for few months with the flow of his devotion, Shri Chaitanya returned towards Prayag. On his way, six Muslim Pathans tried to arrest him but they came so much under the effect of Shri Chaitanya’s aura that, forgetting everything, they immediately became Shri Krishna’s devotee and became famous as Pathan Vaishnav.

While he was in Kashi, Shri Chaitanya defeated scholar Shri Prakashanand in a debate and consecrated him on the path of bhakti. With the acceptance of the bhakti marg of Shri Chaitnaya by Shri Prakashanand, people around Kashi were influenced and the whole area got absorbed in worshipping Krishna and reciting his name. Infinite number of people became the followers of Shri Chaitanya’s Bhakti Marg.

After completing his expedition in Banaras, Shri Chaitanya returned to Puri. Getting the news of his arrival, devotees from nearby area started coming to have a glimpse of him. Shri Chaitanya used to meet them, bless all of them, whoever came in front of him, he used to take away their difficulties and it so happened that difficulties used to go away and that person’s life used to be full of happiness forever.

The last thirteen years (according to some, fourteen) of his life, Shri Chaitanya spent at Puri in the service of Shri Jagannath. He spent the last six years of his life totally engrossed in Radha. Those days, he had all the eminent emotions manifested within him. Whenever he used to cry and shout being unhappy in separation from Krishna, even a stone would get emotional. He used to get so emotional in love for Krishna that many a times he met with accidents, it also happened that his body without life used to lie on the ground and the moment his disciple would take Krishna’s name, he would come back to life.

After religiously praying lord Krishna till 1533, Shri Chaitnaya suddenly disappeared. It is said that he had gone to Shri Jagannath temple for the darshan of Jagannath. Just then all the doors of the temple closed on its own. Emotional Shri Chaitanya embraced Shri Jagannath and there, he merged. It is believed that this happened on June 14th, 1553.

Shri Chaitanya never wrote any religious book because he was not in favor of precept of devotion. As such he was so engrossed in praying that he neither had time nor wish to do so. But before leaving this world he had explained devotion to his disciples in eight padas (poems praising God) and that is the only creation that is available of Shri Chaitanya.

Shri Chaitanya’s love for Krishna had a magnetic attraction which is attracting people till today and the whole world is singing the mantra “Hare Ram Hare Krishna”.

His message of devotion is as relevant in today’s age as it was then. Each and every person of the traditional Hindu culture will always remain grateful to Shri Chaitanya.

Whatever Shri Chaitanya had explained his disciples regarding bhakti, the basic summary of it was, “Man should spend most of the time of his life reciting and singing Lord’s name which is the best and easy way to sanctify one’s soul. He must be so engrossed while doing Kirtan that tears should roll down his eyes, his speech should be greatly delighted and his body full of goosebumps. A person who does Kirtan of Lord’s name should not think himself to be bigger than a blade of grass, become stronger than a tree and personally remain dejected and respect others.  There is no limit to time in reciting Lord’s name, wherever and whenever one wishes, he can recite Lord’s name. God has put in all his sweetness and power in his name. As such all the names of God are sweet and friendly but,

This biggest mantra is the most beneficial and adds to the devotion for God. Reciting the God’s name even without faith also helps man to get rid of all the difficulties and finds a place in the heaven.