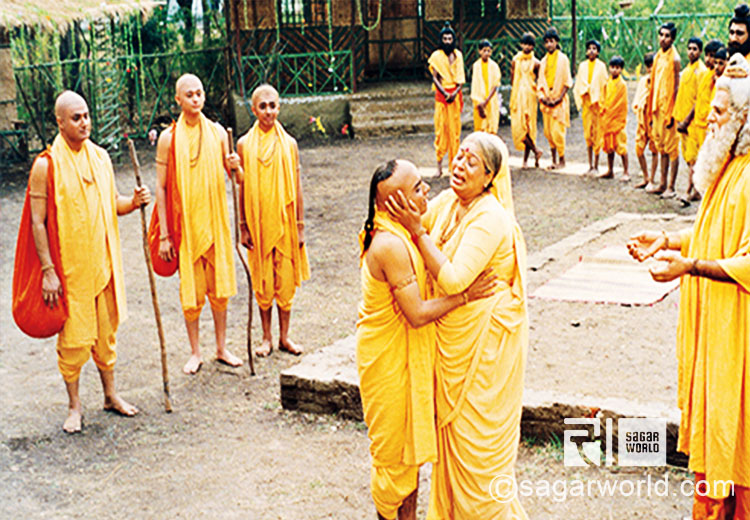 To look for Punardatt, son of Guru Sandipani, Krishna and Balram went to the Patal lok and called for the demon Panchanan. There was a fight between Krishna and Panchanan. Krishna killed Panchanan and brought out Panchjanya conch shell from below and told Balram, “We will announce the start of war with this shell only, whenever a war will be announced with this shell, religion will win.”

When they came to know that the Guru’s son was in Yamlok (the abode of Yama), both of them went there to meet Yamraj.

They got the spiritual soul of Punardatt and brought him to life and handed it over to Guru Sandipani and Guru Mata (mother). Both of them were very pleased and blessed Krishna and Balram.

On getting the news of the death of his son-in-law Kans, Jarasandh planned to attack Mathura and by killing all the members of Yaduvansh (Yadava family) and destroying Mathura, he wanted to take revenge of Kans’s death. His huge army marched towards Mathura.

To save Mathura from this attack, Shursen had a word with his ministers. After discussing each others views, it was decided that they would ask for help from Hastinapur’s king Dhritrashtra.

Akroorji left for Hastinapur with the message of Shursen and Krishna. Just then, Shakuni insinuated Dhritrashtra against Mathura. He said, “Pandavas’ mother Kunti is Mathura king Shursen’s sister and it was possible that Mathura’s general Akroor has come with a proposal to make Yudhishthir (son of Pandu) the king of Hastinapur. That is why, you must think whether you must meet him or not.”

Dhritrashtra was not first ready to meet Akroor but on Bhishma Pitamah’s instigation, he called him to the court. Akroor gave him the message of King Shursen. Shakuni once again insinuated Dhritrashtra, “Jarasandh is a very powerful person and to help Mathura, we cannot afford to have enmity with Jarasandh.” Dhritrashtra got carried away with this and avoided to help Mathura and told Akroor to let him think.

Bhishma Pitamah and Vidur thought of helping Mathura. Vidur asked Bhishma Pitamah to pressurize Dhritrashtra. Bhishma said that in Hastinapur, no one went against the king’s order. Akroor met Pandavas mother Kunti and gave her a hint that Krishna would always support Pandavas. Akroor told her about his experience of the divine sight of Krishna.

Vidhur back story and Jarasandh - Chapter15