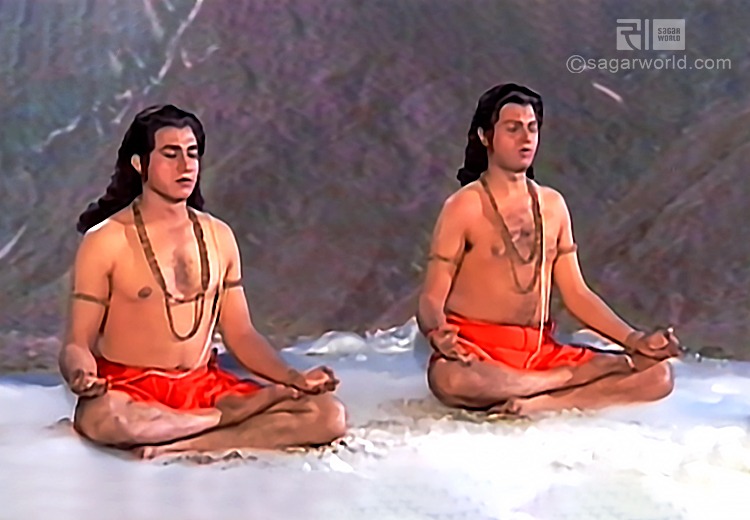 Nar and Narayan were sons of Brahmaji. They were observing austerity on top of the mountain. Indra was scared thinking that they must be doing it to get Indra’s status. To interrupt their austerity, he sent Rambha and few other heavenly nymphs.

Nar Narayan understood his trick and manifested a nymph named Urvashi from their thighs and gave her away to the other nymphs and said, “Tell Indra that this is a gift from us and we have many nymphs like the ones he has sent.”

The nymphs sent by Indra were ashamed and went away.These Nar and Narayan further took birth as Shri Krishna (Narayan) and Arjun (Nar). Shri Krishna settles in Dwarka. Arjun finished his education and returned to Hastinapur.

Duryodhan was upset with Dhritrashtra’s announcement to crown Yudhishthir the prince. Shakuni plotted a conspiracy to kill all the five Pandavas at one time.

With a fear of public revolt, he sent a message to Jarasandh for help. Jarasandh assured him to help.Shakuni informed Duryodhan about his conspiracy by saying,

“According to the tradition of the royal family, the crowned prince Yudhishthir would have to go to Varnavart pilgrimage to worship.

I have got a Lakshagriha (a house made up of lac) made. Yudhishthir will be made to stay there only.

This Lakshagriha will be set to fire at night and Yudhishthir will burn to ashes inside.I have also made an arrangement that all the four brothers go along with Yudhishthir and so even they will burn in the fire. This time our plan will definitely be successful.”

Before leaving for Varnavart, Kunti explained Yudhishthir the ideals of a crowned prince and told him that it was his duty to treat everyone equal and he should always follow the path of justice and religion. Yudhishthir assured her that he will follow these ideals.

Yudhishthir along with his four brothers went to Dhritrashtra and asked for his permission to go to Varnavart. Dhritrashtra permitted and even Kunti went along with the five brothers.

Vidur came to know about Shakuni’s conspiracy. He prayed Krishna to find a way out for Pandavas security. On Shri Krishna’s guidance Vidur made an arrangement for a secret way to get out of the Lakshagriha.

Kunti and Pandavas reach Varnavart. They were made to stay in the Lakshagriha. According to Shakuni’s plan, there were five servants and one maid servant to serve them.

Duryodhan and Shakuni were happy at this but on hearing the news of Pandavas death, Dhritrashtra and Gandhari were very sad.