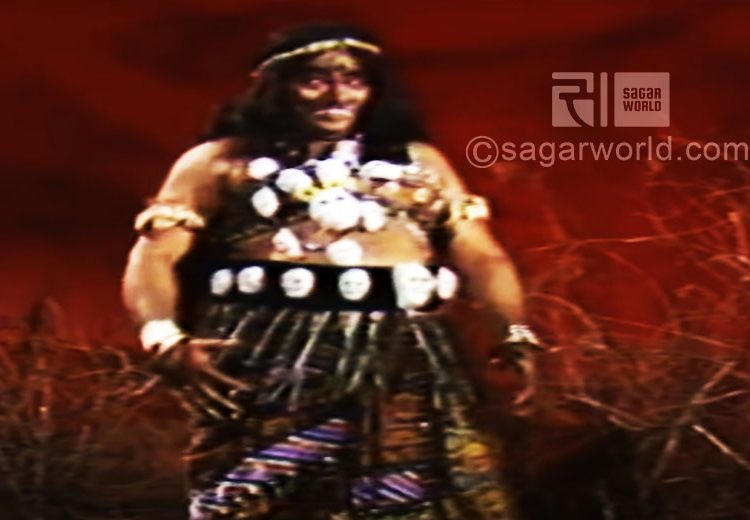 Tadaka was a wicked demonness with the strength of a thousand elephants. Her sons Mareech and Subahu were also very powerful. However, the three of them used their strength to destroy the land lying north of Ganga, Malad and Kurush. In fact, their terror caused people to flee the land, for whoever passed that way, was sure to be killed and eaten by the terrible trio.

Their terror and violence was such that the forest came to be known and feared as Tadakavan (forest of Tadaka).In the close vicinity was the quiet sanctum of Siddhashram, where sage Vishwamitra had been conducting a long Yagna (fire sacrifice). He was also under a vow of controlling his temper, so he could not get angry or curse anyone.Taking advantage of this situation, Tadaka and her sons Subahu and Mareech flew over the sacred spot and dropped faeces, urine and bones from overhead, contaminating the hallowed fire and ritual.

Vishwamitra was fed up with their interference, and at last decided to go to Raja Dashrath, to ask him to send his sons Ram and Lakshman to help him. At first Dasharath was reluctant to do so, but Sage Vashishtha persuaded him to let the two princes accompany Vishwamitra.

When Vishwamitra arrived at Siddhashram with Ram and Lakshman, Tadaka caused a terrible storm to rage there. Huge stones and boulders began to rain from the skies. Vishwamitra told Ram “It is Tadaka that is causing these strange storms. She has made our life miserable with her wicked ways, so kill her as soon as possible, O Ram!”Mareech was the son of rakhasni (demoness) Tadaka. His father was Sunda, the son of Jambha. His brother was Subahu. Both brothers were strong and mighty but their nature was cruel and destructive, a trait they inherited from their father Sunda.

The destructive Sunda was once creating havoc in the hermitage of Sage Agastya, when the sage cursed him to an instant death. When they heard of the death of Sunda, the two brothers Subahu and Mareech rushed along with their mother Tadaka to devour sage Agastya.

But before they could do so, Agastya cursed them to turn into terrible, repulsive rakshas and rakshasi (demon and demoness). “The people of Malad and Kurush are also fed up with these demons, so Ram, please hurry up and kill this Tadaka!”

Ram began to fight Tadaka, but he could not bring himself to kill a woman. But sage Vishwamitra reminded him, “It is a helpless woman who should not be attacked by a Kshatriya (Warrior caste) warrior! Tadaka is not one of these; she is a wicked demonness. Kill her at once! Even in olden days, many brave Kshatriya warriors killed demonnesses like her!”

So Ram, in obedience to sage Vishwamitra’s command, killed Tadaka. Siddhashram was now quiet and calm, and the sages began their yagna again, guarded by Ram & Lakshman who stood watch nearby. Then with a thunderous roar, Subahu and Mareech appeared overhead and began to harass the sages.

Ram aimed a featherless arrow at Mareech and he fell into the sea a thousand leagues away. He was the maternal uncle of Ravan. Then Ram attacked Subahu and killed him, and finally Vishwamitra was able to conduct his Yagna (fire sacrifice) uninterrupted.When Tadaka fell to her death, an amazing transformation occurred. She turned into a beautiful Yakshini (celestial being), bowed to Ram and disappeared into the sky in the twinkling of an eye. Subahu also was liberated thus.

Sumitra - the third wife of Dashratha