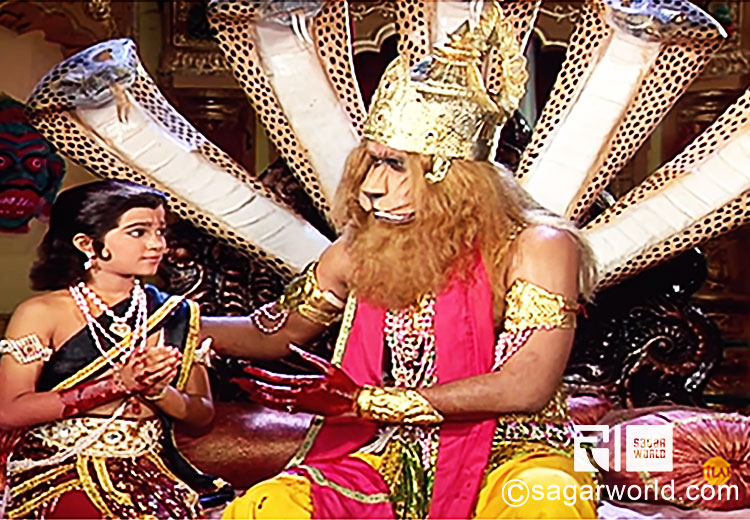 While Prahlad was in the womb of Kayadhu, demon priest Shukracharya with his spiritual power came to know that Kayadhu’s child would be a devotee of Vishnu. That is why,

Shukracharya planned a conspiracy to destroy the fetus and during the Godbharai ceremony (baby shower) of Kayadhu, he transformed the fruit juice, which was to be given to Kayadhu into poison. But Devi Ganga herself drank the poison and thus saved Prahlada (Great Devotee Of Lord Vishnu) while he was in the womb.

Prahlada (Great Devotee Of Lord Vishnu) started worshipping Vishnu right from birth. Hiranyakashyap got very angry at this devotion and tried to kill him. He tried killing Prahlada (great devotee of lord  Vishnu) by many different means, like having him trampled by an elephant, throwing him from a mountain top, putting him in a room with venomous snakes, drowning him in the sea, and also poisoning him, but every time, by the grace of Lord Vishnu and the blessings of Gangamaiya, he survived each and every time.

”Once, Hiranyakashyap made Prahlada sit on the lap of his aunt Holika who was sitting on a fire, having acquired a boon from Shiva that she could walk through fire unharmed.

But Holika herself ended by being burnt in the fire and Prahlada (devotee Of Lord Vishnu) was saved once again. This incidence of Prahlad’s life is celebrated even today to commemorate the victory of good over evil in the form of Holikadahan (bonfire one night before the colorful Holi celebration).”

The burning of Holika during Holi is also to remind us to burn our evil tendencies, of conceit, greed, hatred, lust and all impurities. After all it was only the pure BhaktPrahlad (devotee of Lord Vishnu) who emerged from the flames unscathed while Holika inspite of her boon was reduced to ashes.

If God can make the rules he can break them too, especially if they are misused by the boon receiver.

Fed up with the atrocities of Hiranyakashyap, the devtas and Sages pleaded with Lord Vishnu to liberate them from the oppressor Hiranyakashyap, who was given a boon by Lord Brahma that he could not be killed by any human being, animal or devta.

”Lord Vishnu manifested in the form of the Narsimha (half lion, half man; neither animal nor human) at twilight (neither day nor night) and while on his lap (not touching the earth nor in the sky or water), tore open Hiranyakashyap’s stomach with his nails (not using a weapon) and thereby killed him. Thus he freed the devtas from Hiranyakashyap’s atrocities.”

BhaktPrahlad was considered very holy, and he still is today, because at such a tender age he challenged his father’s sinful orders, whereas as the elders in King Hiranyakashyap’s Kingdom had succumbed to the King’s orders and had started worshipping him.

”We can be inspired by the young BhaktPrahlad’s immense devotion, and reminded that with such unselfish devotion and faith in God, through all hardships and calamities we will be protected and that no evil, however strong, can conquer righteousness.”