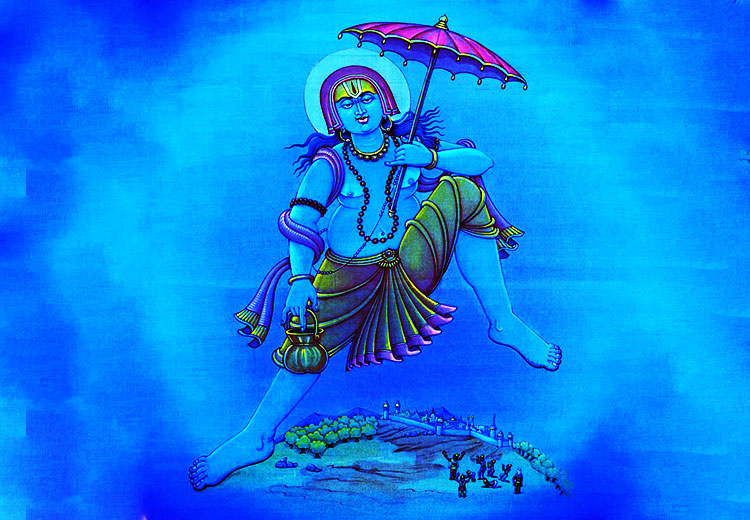 King Bali left his throne and asked kamandalu (waterpot) to perform the samkalpa, which is done before all acts of charity.

Afraid that the king would complete the samkalpa ritual, Shukracharya sipped some water from the kamandalu to become small enough to enter the spout of the kamandalu to prevent the flow of the water.

Aware of Shukracharya’s actions, Brahmachari forced a piece of straw into the neck of the kamandalu to clear the passage.

The straw pierced through the eye of Shukracharya who, unable to bear the pain, jumped out of the pot, allowing the water to start flowing again.“King Bali sipped the water from the kamandalu three times, chanting the mantra that repeated his intention to give three footsteps of land to Brahmachari.

After the ritual was over, King Bali asked the dwarf Brahmachari to measure the land. Soon after Bali’s request the dwarf started increasing his size and became unbelievably large.”

In his first step Brahmachari measured the entire Earth, with all its rivers, mountains, and oceans. In his second step he measured all seven lokas and his foot even reached up to the abode of Lord Brahma, known as Brahma Loka.

“When Lord Brahma saw the extended foot of what was really Lord Vishnu, disguised as Brahmachari, crossing all the lokas and reaching up to his own abode, he became excited.

“This will never happen again,” Lord Brahma thought to himself “Never again will Vishnu put all his energy into his one foot. I must preserve this energy,” Lord Brahma said, and he began to contemplate a way he could accomplish this feat.

Lord Brahma decided that when the big toe of the left foot of Lord Vishnu came in his direction he would wash it with the water from his kamandalu and then store the water in which Vishnu’s toe was washed back in his kamandalu.”

The water Lord Brahma was able to obtain from washing Lord Vishnu’s foot was like an elixir. It was from this magical elixir that in due course of time a beautiful girl was born.The girl was adopted by Lord Brahma as his daughter and was given the name Ganga.

Meanwhile, after measuring all the lokas above the Earth, Lord Vishnu, still disguised as Brahmachari, asked, “Where should I put my third step, O King?

The entire Earth and Heaven has been measured by me in only two steps. You still owe me what-ever land I would measure in my third step.” “You should put your third step on my head, O Lord,” King Bali replied with great humility.

“That is all I can offer. I have nothing more left.” Lord Vishnu put his left foot on Bali’s head and pressed down with a tremendous force.

King Bali’s entire body sank into the Earth, reaching all the way down to Patal Loka, the Underworld, and Bali asked Vishnu to promise to live in Patal Loka as his guard. Thus Vishnu freed Heaven and Earth from Bali’s domain.

The gods were happy because they got back their abode. The humans were happy to again have the freedom to worship the gods of their choice.

And King Bali was happy because he would get the company of Lord Vishnu, even if it was confined to the Underworld.

“The water Lord Brahma was able to obtain from washing Lord Vishnu’s foot was like an elixir. It was from this magical elixir that in due course of time a beautiful girl was born.

The girl was adopted by Lord Brahma as his daughter and was given the name Ganga.”