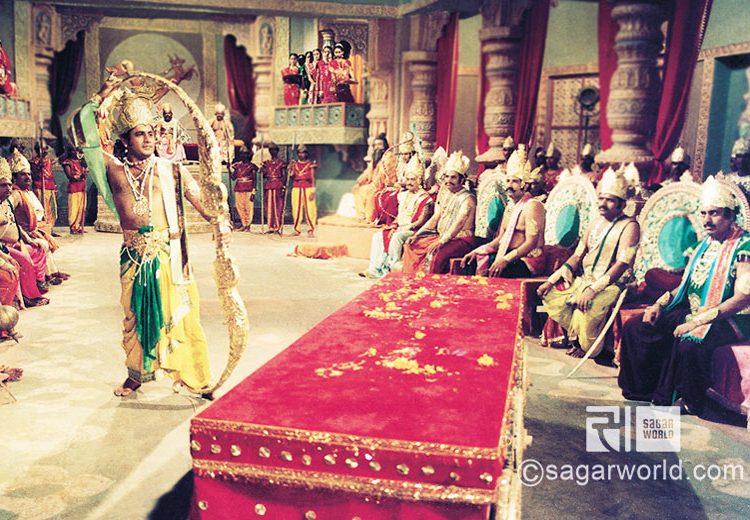 Shri Ram breaks the bow of Shiva and married to Sita

After finishing his studies at the Gurukul, Shri Ram returned to Ayodhya. His father and the three mothers were overjoyed to have the boys back home. Sage Vishwamitra came to the court of Dashrath and told him how the “Rakshasa’s” (demonic forces) were creating havoc during his Yagna (fire-sacrifice/offering). He asked him to send Ram and Lakshman to protect his ashram from their depredations and assaults. King Dashrath intervened, saying that the boys were too young, and offered to go himself with Sage Vishwamitra. But the sage was adamant, and insisted that it was Ram and Lakshman that he needed. After consulting with Vashishtha on the matter, Dashrath let the young princes go with him. There was divine plan (Leela) as usual and little did Ram realise that would be married when he got back from this trip.

On the way, the demonness Tadaka attacked them, but Shri Ram killed her with one well-aimed arrow. In gratitude, Sage Vishwamitra gifted Ram and Lakshmana with weapons that were blessed and would never miss their mark.

At the site of the Yagya, at the ashram, Shri Ram told the sage to begin the ritual while they would stand guard.

Immediately the demons Subahu and Mareech attacked, and began to profane the ritual, laughing raucously and throwing offal into the holy fire. Shri Ram aimed a featherless arrow at Mareech, and fired; Mareech was picked up by it and swept away, falling a hundred yojans (Unit of distance dating back to ancient India, which is said to measure: 1 yojana = about 8 miles = about 12.8 km. This is a unit of distance dating back to ancient India. It is said to be the distance of a one-day trip for an oxcart) away into the southern sea.

Lakshman took up his guard to protect the yagna from further assaults, while Ram  killed Subahu next, who tried to attack them once again. Thus the havoc caused by these demons in the area of Siddhakshetra finally came to an end, and Sage Vishwamitra was now able to perform his Yagna without any disturbance.

At that moment, a messenger arrived from King Janak, ruler of Mithila (present day Nepal) inviting Vishwamitra Rishi to visit Mithila, and attend the Swayamvar (marriage ceremony where the woman chooses her husband from an array of candidates who must perform a certain task succesfully) that had been arranged for Janaka’s daughter Sita, with a “Dhanushyagna”, a sacred and ancient bow must be lifted by the candidates, a seemingly impossible task. Sage Vishwamitra took Ram and Lakshman along with him to attend this auspicious event.

On the way, they stopped by the banks of Mother Ganga and spent the night besides the holy river. Vishwamitra told them the story of Ganga’s descent from the heavens and the great achievement of their ancestor King Bhagirath, who brought the sacred river down to earth with his intense penance. Ram and Lakshman were thrilled to hear the tale.

Next day, on the way, they came across the ashram of Sage Gautam. It was deserted and there was only the petrified form of Ahilya, the wife of Sage Gautam to be found there. Sage Vishwamitra narrated the story of Gautam and Ahilya to them. Ahilya had been cursed by her own husband to turn into stone after he discovered her cheating on her with Lord Indra who had taken the exact form of her husband, Gautam Rishi. He then asked Ram to touch the stone figure with his foot.

As soon as Ram’s foot touched it, the stone form of Ahilya became human once again, and singing praises of Ram’s greatness, Ahilya bowed to him, then disappeared to join her husband once again in the heavenly realms. With the sage, Ram and Lakshmana proceeded to Janakpuri.

When the people of the town saw them arriving via the main road, they thronged en masse to catch a glimpse of the two handsome, enchanting young men. Everybody, men and women, old and young, were all captivated by the sight of Ram and Lakshmana. When he received the news of Sage Vishwamitra’s arrival, King Janaka, ruler of Mithila, hastened to welcome him with due honor. The sage introduced Ram and Lakshman to him. Ram’s charming face enchanted Janak, and he gazed spell-bound at him.

At night, before retiring, Ram and Lakshman pressed Vishwamitra’s feet, but as the hour was late, the sage bid them stop and go to sleep.At daybreak, as soon as they heard the cock crow, the two boys woke up at once. On the guru’s order, they went to gather flowers from the garden for his puja.

The two boys walked around the lovely pushpvatika (garden of flowers).

At that time, King Janak’s daughter, Sita came to the garden with her friends to worship at the temple of goddess “Gauri”. Their eyes met and Ram and Sita beheld each other for the first time. Sita was overcome by the glowing, handsome countenance of Ram, and closed her eyes in rapture. Somehow her friends managed to guide her away to the temple for the “Gauri” puja.

Silently praying to the Goddess, Sita fervently asked to be married to Ram. The Goddess granted her wish. But this secret longing and the granting of the unspoken boon was not revealed to anyone else. Guru Vishwamitra reached the location where the “Swayamvar” (marriage ceremony) was to be held.

All the kings present in the assembly paled before the radiance of Ram. King Janaka then announced that whoever lifted this mighty bow of Lord Shiva, would receive the garland from Sita, as her chosen husband. One by one all the kings tried to lift the bow but they could not even move it an inch, let alone lift it. Then some kings tried to lift it together as a team but their combined strength was not enough to even raise the ends of the bow up.

Raj Rishi Janak then announced that he was grieved to think that there was no man left on earth worthy to meet this challenge. Had he known this, he would not have leveled such a difficult condition to wed his daughter. This enraged Lakshman. He declared loudly that such a statement should not be made in an assembly where “Raghuvanshis” (from the dynasty of Raghus) are present.

“You are asking for the bow to be lifted, but if my guru allows and my elder brother Ram blesses me, I can lift the bow like a branch from a tree!”, he said angrily. Sage Vishwamitra pacified Lakshman and told him to sit down. He then directed Ram to pick up the bow.

Shri Ram walked towards the bow, and to everyone’s astonishment, lifted it with great ease. He drew back the bowstring until the bow broke in two. The heavens resounded with the crack of the bow breaking asunder. Everyone was shocked into silence.

King Janak was delighted to see Ram was the one who fulfilled the terms of the ceremony and asked an overjoyed Sita to come forward. Sita put the bridal garland around Ram’s neck. The “devtas” rained flowers from heaven in joy.

Moments later, Sage Parshuram arrived. He looked in rage at the pieces of the bow lying on the ground, and demanded in a loud angry tone: “Who has broken the bow belonging to my chosen God Shiva? Tell me so that I can punish him!” King Janaka was shaken, as the mood of the assembly changed from joy to fear. Lakshmana boldly confronted Parshuram and said, “It was an old bow anyway. So what if it broke? Why make so much fuss over it? We broke countless bows when we were young, and no one ever got upset about it.”

Parshuram said, “You insolent creature! I am sparing you only because you are still a child!” Vishwamitra once again calmed Lakshmana and told him to go sit down. Ram came forward, addressing Parshuram very cordially, admitting with candor: “It is I, your humble servant, who broke the bow. We, the Suryavanshis, have always respected Brahmins.”

Ram’s humble stance and polite tone impressed Parshurama. He looked him over carefully and noticed the brilliant signs of a Divine avatar in Rama. So, picking up his own celestial bow, he handed it to Ram, requesting him to string it, if he could.

As soon as the bow touched Ram’s hand, the bowstring stretched and the bow strung itself. Parshuram bowed low before Ram. “You are Vishnu incarnate, the Lord of the Universe. Forgive me my impertinence!” he said. Then, Parshuram turned away and returned to his dwelling place on Mount Meru.