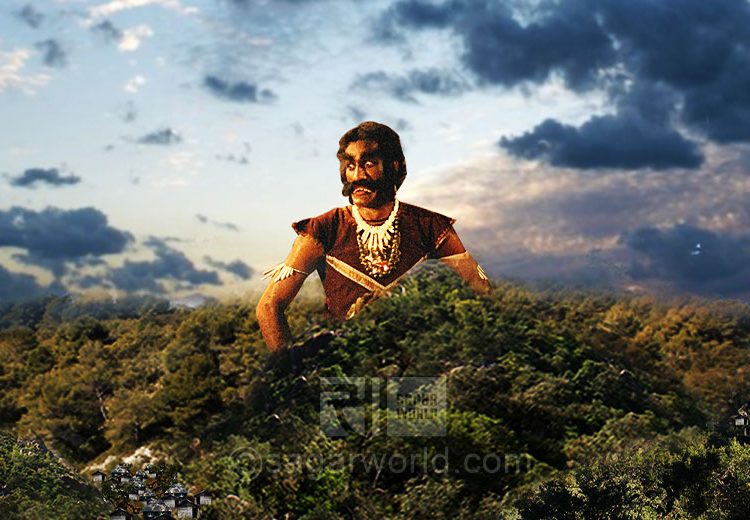 Viragh was a dreadful, grotesque-looking Rakshasa (demon), who crossed the path of Shri Ram, Sita and Lakshman when they were going through the Dandaka forest, after bidding farewell to Rishi Atri. He lunged at and seized Sita and growled loudly at Ram, saying “You dress like an ascetic but have a woman by your side. That’s not correct. From now on she’s mine.” Ram aimed many weapons at him but no astra or shastr (weapon) was effective. Viragh said, “I have been blessed by Brahma that no weapon can hurt me and no one can kill me with weapons.”He told Ram, “I am the son of a Rakshasa called Jav and my mother is Shathara. I was earlier a Gandharva (celestial being) named Tumbuk, but one day when I did not turn up in time, Vaishnav Kuber cursed me to become a rakshasa.

I was in love with an apsara called Ramya and that was the cause of my delay. When I pleaded with Kuber, he said “When Dashrath’s son Ram fights you, you will be freed of this curse of becoming a Rakshasa.”When he could not be killed in battle with Ram, Viragh suggested that Ram should dig a hole and bury him alive so that he could be freed from his curse. Lakshman dug a huge trench and Shri Ram pushed Viragh in and covered him with stones and mud. At once Viragh appeared, having turned back into his divine form.

He told Ram “Lord, at a distance of one and half yojanas from here, there is the ashram of Sharbhang Rishi. Make haste to go there; he will guide you well.” And then Viragh disappeared, returning to heaven in his original form of Tumbuk Gandharva.