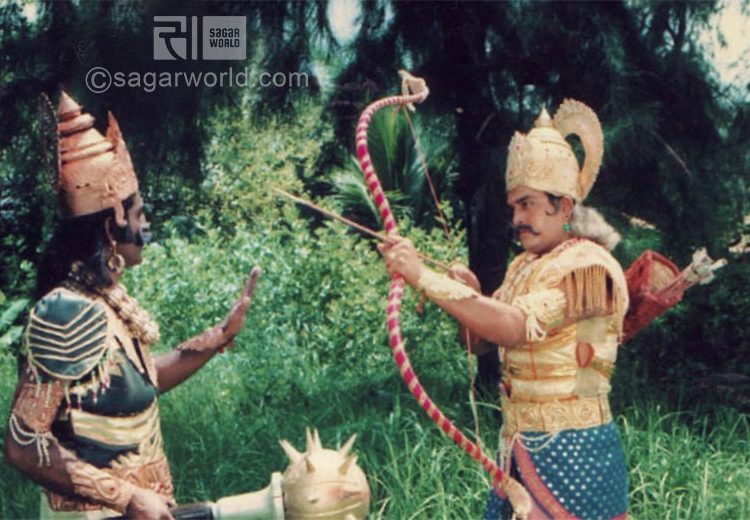 Once in Brahmalok (the eternal residence of the God Brahma), Lord Brahma was seated on a white lotus. Goddess Saraswati was sitting next to Him. Just then Devrishi (sages who are living in the abode of Gods) Narad came and bowed to Lord Brahma. Narad was worried. When Brahmaji asked Devrishi, Devrishi said that he had been to the “Kumbhmela” at Haridwar where he bowed to Gangaji and then went to Vrindavan where he heard a lady crying. Two people were sleeping next to the lady. When Narad asked her for the reason she was crying, she said that she was Bhaktimata (Goddess) and the two people next to her were her sons, knowledge and asceticism who had become very weak due to the impact of Kalyug. All three were sad. She wanted to know if there was any way out wherein all three- devotion, knowledge and asceticism could live together. Naradji went to Kshirsagar to ask Lord Krishna for a solution.

Naradji said, “Lord, during kalyug, no one will be able to carry out strong devotion and religious rites because of which Bhaktimata is very worried; please show us a way out wherein even in kalyug these three can stay together.” Shri Krishna asked them to go to Brahmaji. Narad asked the same question to Brahmaji. Brahmaji said that there was only one way out in kalyug and that would be reading Shrimad Bhagwat Katha and through this chant Shri Krishna’s leelas (acts). He said, “You go to Badrikashram, you will find the path of welfare there”.

Narad reached Badrik ashram where he met Sanka, Sanandan, Sanaatan and Sanatkumar. On Narad’s instigation; they organized for Bhagwatkatha on the ghats of Ganga rear Haridwar. The folklore said by Santkumars was said by Sutji to Shounak and few other sages in the Naimisharanya.

The Katha (folklore) started with the start of Kalyug. Shri Krishna had completed his leelas and gone to devlok (abode of the deities). Pandavas handed over the charge of the state to Parikshit and reached Himalayas. Dwapar yug (age) had come to an end and Kalyug had just started.While he was hunting in the jungle, Parkshit met Kalyug. Parikshit would not have permitted living on this earth then

Kalyug said, “This is an assertion by the Goddess of destiny. After the end of Dwapar age, I was to come. You will have to give me a place.” Parikshit then allowed him to live with untruth, ecstasy, desire, cruelty and also gold. First of all, kalyug went and sat on a golden crown on Parikshit’s head.

King Parikshit was thirsty. He reached Sage Shamik’s ashram where the sage was meditating. King called him many times but he did not listen. Kalyug was sitting in the crown on the King’s head. He corrupted the king’s wit, so the King got very angry and put a dead snake around the Sage’s neck.

Shamik’s son Shrungi was very angry when his father was insulted, so, Shrungi cursed Parikshit that whoever had insulted his father would be bitten by a snake on the seventh day that would cause his death. When Shamik rishi finished his meditation and heard about this, he felt very bad because he knew that whatever the king did was because of the effect of kalyug. Later the king reached his palace, and as soon as he removed his crown he realized his mistake and repented. Sage Shamik told him, “The only way for your welfare is to listen to ‘BHAGWAT KATHA’. Go to Sage Shukdev and request him to read Krishnakatha for you and this will help you for your welfare.King Parikshit requested Sukdevji to listen to Shrimad Bhagwatpuranam.

According to the story, Mathura’s oppressor demon Kans had made life difficult for the saints and sages. The subject was very unhappy. Deities were also sad. They went under the shelter of Lord Brahma. Brahmaji told them, “it was time for Lord Krishna to incarnate on the earth; he will be born to Devaki, Kans’s sister.” Kans was unaware about this. He got his sister Devaki married to Vasudev. Just then there was a divine utterance, “Kans! The sister you are getting married, her eighth child will kill you.” Kans was frightened and locked Devaki and Vasudev in the prison.

When Kans’s father King Ugrasen heard of Devaki and Vasudev being made prisoners, he got very angry. He scolded Kans and ordered to release both of them. Disrespected Kans, with the help of his neighbour and friend King Banasur and Bhoumasur planned a conspiracy against Ugrasen. In between, Kans kept King Ugrasen’s faithful priest and other neighbouring Yadava Kings under strict watch in his palace. In the prison, Devaki gave birth to her first child, but Kans killed the child and put Ugrasen in the prison.

During this time, Akroor, Shursen and few more neighbouring Yadava Kings thought of a plan to save Vasudev’s second wife Rohini from Kans’s terror. One night, in the disguise of a water woman, they made her cross the river Yamuna and dropped her to Nand’s place in Nandgram. Yashoda and Nandji kept Rohini in their house with great respect and on hearing about Kans’s oppression in Mathura they felt very bad for Vasudev and Devaki.