Shravana Kumar – the most devoted son ever of parents 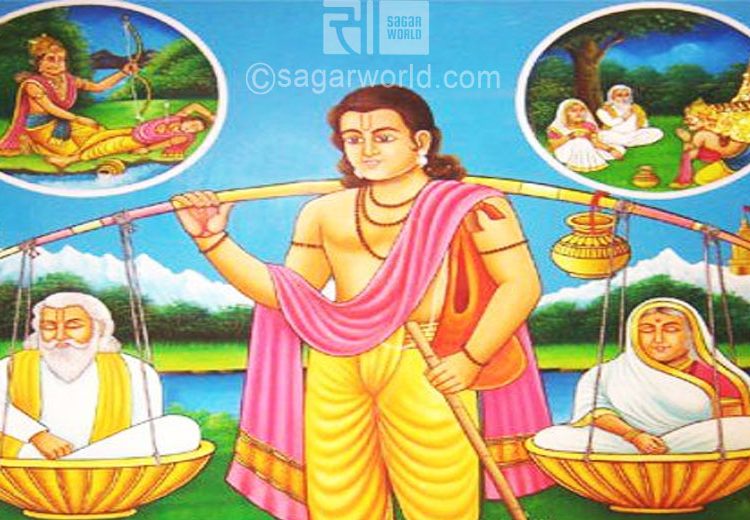 Shravana Kumar was a bright young ascetic. He was born of a Vaishnav (a sect that prays to Vishnu as the supreme God Head) father and a Shudra (the lowest caste, who mostly do manual labor) mother. Yet unmindful of his lineage, he was a brilliant mendicant. Both his parents were blind and Shravana was their sole solace and support. Shravana looked after every need of his parents and tended them with care.

Shravan had taken his parents on a pilgrimage all across the country. He carried them in two baskets with a rod resting on his shoulders. They had halted for some rest at an unknown place. It was a dark night when his parents asked for some water to drink. Shravana picked up the earthen water pot and went to fetch them some water from the Sarayu River nearby. By chance, at that very time, the young prince Dasharath came there to hunt deer.

It was a dark and stormy night, the visibility was low, and the young prince was enthusiastic. He was not yet married and his father was still the king. He was an expert archer. The dark did not deter him, for he was proficient in a special form of archery called Shabd Bhedi Baan (that is, aiming and shooting arrows based on the direction of sounds, rather than by sight.)

Shravana reached the banks of the Sarayu and dipped the pot in the river water. In the night, the water splashing around sounded as if an animal had come to drink at the river. Based solely on the direction of the sound, Dasharath shot his arrow. A loud scream rent the silent night. It was not the cry of a wounded animal, but that of an injured human. Horrified, Dasharath ran to investigate. He explained to Shravana the cause of the accident.

Shravana told him that his old, blind parents were thirsty and waiting for him to bring water for them. “I was filling the pot when your arrow hit me.” he said. Dashrath removed the arrow from Shravana’s chest, but the injury was fatal. Before he breathed his last, Shravana Kumar said, “Go and give water to my parents and tell them the reason for my untimely death.”

Filled with fear and remorse, young Dasharath took the pot of water to the hut where the parents were awaiting the return of Shravana. With a heavy heart, he narrated the events that had led to the death of their son.

The blind old couple said, “Take us to our son. At least we can offer thelast sacraments for him.” Dasharath arranged the pyre for Shravana, and performed his last rites.Then the old parents said, “O prince Dasharath, you are the cause of our deaths also, having killed our beloved son. You too will die in desperation and sorrow over the loss of your son.” Both the parents then jumped into the burning pyre, and ended their lives.

This incident was narrated by Dashrath as he lay in deep sorrow after Ram’s departure for the forest for fourteen years. It was as a result of this curse from Shravana’s parents, that none of his four sons were at his deathbed. Ram and Lakshman were away in the forest, while Bharat and Shatrughna were at Kaikeyi with their maternal uncle. Thus, the curse given to Dashrath by the parents of Shravana Kumar, played an important part in the story of the Ramayana.

Shravana Kumar is looked upon in Indian tradition as an ideal son. As his parents could not see, he carried them with him in baskets, balanced on his shoulders and even took them with him on a pilgrimage of the chardham (four holy pilgrimage towns situated in four corners of India, which every Hindu should do during their life time, Rameshwaram in the South, Puri in the East, Dwarka in the West and Badrinath in the North).The image of Shravana as a devoted, loving son is forever etched in our minds. In India, he is the beau ideal of how sons and daughters should behave with their parents.