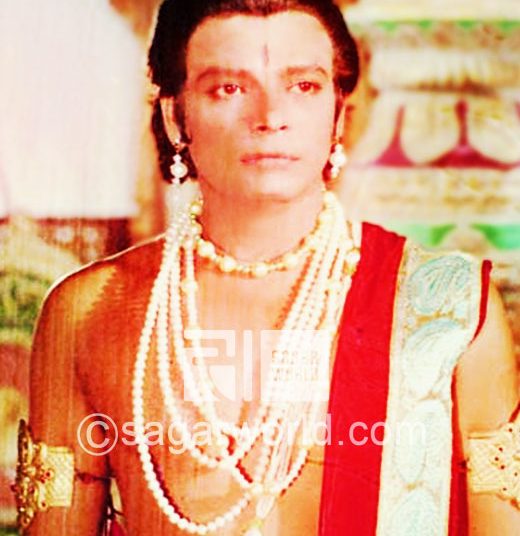 Shatrughna and Lakshman were sons of the second queen Sumitra, wife of Dashrath, the King of Ayodhya. Shatrughna mirrored many aspects of Lakshman’s personality and character. Lakshman followed the footsteps of the paragon of truth, Ram while Shatrughna was equally attached to the unworldly and devoted Bharat, son of Kaikeyi, and followed him everywhere for he knew that Bharat was a complete devotee of Ram.

In Bharat’s life, there was no other goal loftier than service to his brother. During the Sita Swayamvar, when Sita was wedded to Ram, Raja Janak arranged for the wedding of Shatrughna to Shrutkirti, the daughter of his brother Kushadhvaja. Bharat was married to Mandavi and Urmila to Lakshman.

When Bharat placed Ram’s charan paduka (sandals), on the throne and went to live in far away Nandigram in a straw hut, he lived there for fourteen years, awaiting the arrival of Shri Ram. It was Shatrughna who assumed the mantle of royal duties and the running of the Kingdom.

For fourteen years he ruled, as an able and just general and administrator. He made sure that the Queen mothers did not feel the absence of their sons. His guru had justly named him, for he very ably overpowered all evil forces and enemies of the state and took care of Ram’s subjects as ably though it were he on the throne, which in a way  He was, being that Bharat had publicly renounced his kingship and later had placed  Ram’s sandals on the throne.

After fourteen years, Ram Lakshman and Sita returned in triumph to Ayodhya. It was his Guru Vashishtha who arranged for the coronation of Ram. In those days, Daityas Madhu’s son Lavanasura, was creating havoc in the Madhu van (Madhu forest), making the subjects very unhappy.

Shatrughna then requested of Ram: ”The world knows the many ways in which Lakshman has served you. Now grant me the opportunity to prove my Kshatriya (warrior caste) worthy to be in your service by killing Lavanasura as a service to you.” Ram gave him that permission. Shatrughna killed Lavanasura and out of the ruins he had left behind, Shatrughna established the kingdom of Madhupur, which later came to be known as Mathura. Raja Ram himself crowned Shatrughna the king of Madhupur.

When Ram conducted the Ashwamegh Yagna (a type of kingly sacrifice where a horse is let loose to wander and whichever kingdom that horse crosses into has to accept the owner of the horse as their overlord or then fight with them), it was Shatrughna who led the horse Dig Vijay, and who made the yagna successful. Shatrughna was also a partial incarnation of Vishnu.

By looking after the welfare of the family, his queens, the subjects and the kingdom, Shatrughna left behind stellar proof of his righteous character. He is equal to Bharat and Ram in his goodness and nobility.