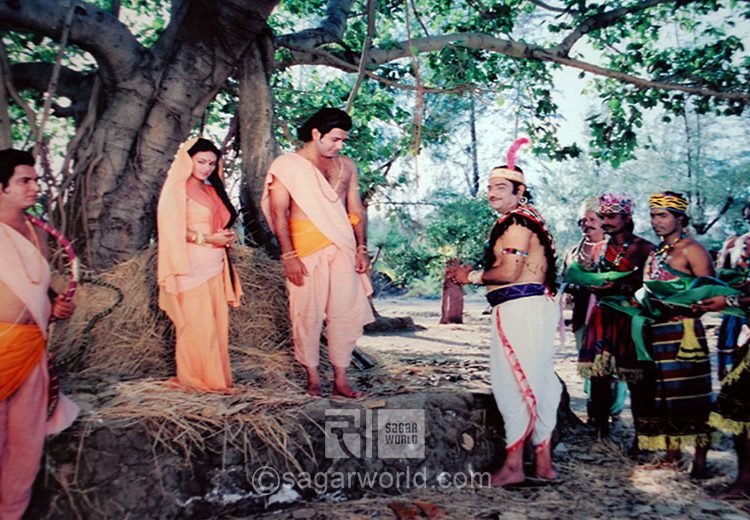 When King Dashrath learnt that Kaikeyi was in the sulking chamber, he went there and asked her the cause of her distress and anger. “Tell me who has wronged you and I will punish him,” he said lovingly. Kaikeyi said “No one has wronged me, but you gave me two boons that you have not yet fulfilled.

King Dashratha said, “Today is such a happy auspicious day that I can grant you four, not just two, wishes. I promise to fulfill them.”

Kaikeyi replied, “I want just two boons you owe me.”

“Very well. What are they?”

“One, I want my son Bharat crowned as the King, and two, that Ram should spend the next fourteen years as an ascetic, living in exile in the forest.”

King Dashrath was completely devastated when he heard her demands. The news rapidly spread throughout the city and everyone harshly criticized Kaikeyi. But Shri Ram felt obliged to fulfill the terms of the boons his father was forced to accede to.

He tried to comfort Dashrath by stoutly reminding him of how the men of Raghu clan have always been true to their word. “We, Raghuvanshis have always been led by truth and commitment. Let’s now follow that motto with a smile,” said Ram. Dashrath, however, fainted away in the extremity of his grief at losing his son in this way.

Ram went to Kaushalya and told her of his decision to go to live in the forest. Kaushalya was sad to be parted from Ram, yet proud of his decision. She said, “Whether it is my wish or Kaikeyi’s, fulfilling a mother’s wish is the duty of a son.”When Ram told Sita and Lakshman about his decision, they were both eager to follow him.

Kaushalya tried to warn Sita about the troubles and dangers of the forest, but Sita was adamant. Lakshman too could not bear to live in Ayodhya without Ram. Lakshman’s mother, Sumitra, gave him permission to leave with Ram, and told him that his duty lay in serving Ram and Sita.

Sumantra carried Ram, Sita and Lakshman in a chariot to the outskirts of the city. But he was not alone. Saddened by the news of Ram’s departure, many of the citizens of Ayodhya, men and women, young and old, followed him on foot, determined to go wherever Ram went.

At night Ram rested by the bank of the Tamsa river. The weary citizens also fell asleep wherever they could find a place. When all of them were in deep sleep, Ram signaled to Sumantra and the three of them rode away quietly in the chariot. When at dawn the citizens woke up to find Ram gone, they were sad and disappointed, and finally went back to Ayodhya.

Shri Ram, meanwhile, reached Shrngaverapura by the banks of the Ganga. The King, Nishadraj Guha welcomed them and offered them the best of the wild berries, fruits and roots. As he had undertaken to live an ascetic life, Ram did not enter any city or village. He made a rough grass bed under a Sheesham tree to lie on, and he and Sita slept under the tree.

Nishadraj was sad to see them thus, instead of enjoying the royal luxuries they were accustomed to in the palace. Then, he joined Lakshmana, who sat at a distance, watchful and alert. Both of them sat awake all night on guard.

In the morning Ram and Lakshman both tied their hair into a jata (in a bun) in the manner of ascetics. Ram then wanted to cross the Ganga. So Nishadraj called Kevat, a boatman. He said to them, “I will take you across. But I have heard that the touch of the dust of your feet turned a rock into a woman.”

“I will wash the dust off your feet before I let you set foot on my boat. What if my boat turns into a woman? How will I earn a living and look after my family?” This, of course, was merely a ruse invented by him in order to allow the opportunity to wash Ram’s feet and pay his respects to him.

So Ram allowed Kevat, the boatman, to wash his feet, and then Kevat happily took them across the river Ganga. Sita made a wish that they return safely and worshiped the river. When they reached the other side, Ram had no money to pay for the boat ride, so Sita gave her ring to Kevat.

Shri Ram, Sita, Lakshman and Nishadraj went to the ashram of Sage Bhardwaj who gave them a warm welcome. They spent the night in the ashram, and in the morning Ram asked Nishadraj to return to his kingdom while he proceeded with Sita and Lakshman towards the Ashram of Valmiki.