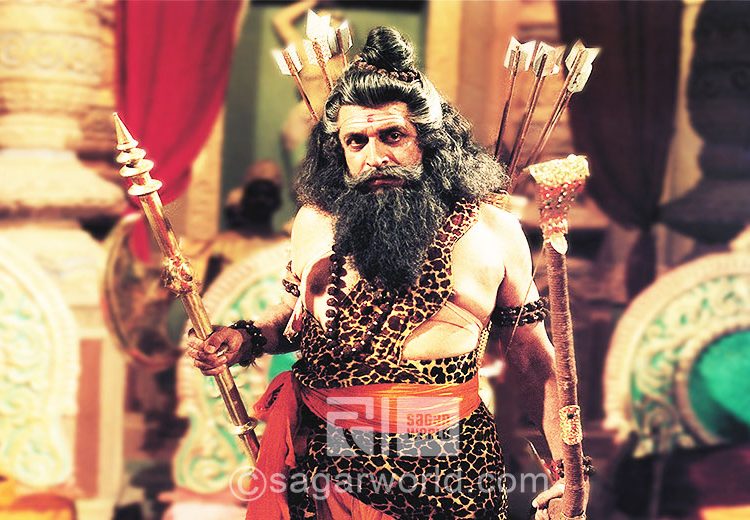 Parshurama was the fifth son of Sage Jamdagni. As Rishi Jamdagni belonged to the Bhrigu clan, Parshurama was also known as Bhargava. His mother was Renuka and he was devoted to both his parents. He spent a long time in intense devotion and meditation, praying to Lord Shiva who bestowed on him a “Parshu” (axe) as a boon. Although originally his name was Ram, he began to be called Parshurama thereafter.

Once his father Jamdagni was conducting a Yagna (fire-sacrifice) and asked his wife Renuka to fetch water for the sacrifice. She went to a pond in the Himalayas to fetch water but there she found a group of gandharvas and apsaras (celestial beings), in dalliance, sporting playfully. So amazed was she at this sight, that she waited and watched for a while and forgot why she had come there.

Meanwhile Sage Jamdagni was waiting impatiently for the water. When Renuka did not return for a while, he used his yogic powers to locate her and found her tarrying. When at last, she returned with the water, the enraged sage ordered his eldest son to slay her. But the lad refused to do so. He then told the second son, the third and the fourth in turn. But they did not obey his difficult command.

Just then Parshuram arrived there. Jamdagni said to Parshuram, “Kill your mother!” Without a moment’s hesitation, Parshuram did as he was told and cut his mother’s head off. Jamdagni was happy to see his order obeyed. He said, “I am glad to see your devotion and filial duty to me. Ask me any boon and I shall grant it to you.”

Parshuram was aware of the celestial powers his father possessed, and he immediately asked him to restore his mother Renuka back to life and also added that she should not remember that he had killed her. So it was, and Renuka was restored to life by Jamdagni’s power.

Parshuram was equally devoted to his mother. Once Kartivirya Arjun wanted to steal the Kamdhenu (wish-fulfilling) cow owned by Jamdagni, and killed him in order to do so. Renuka was beside herself with grief. She wept copiously, beating her breast again and again. Parshuram came there and saw her in grief. He noticed that she beat her breast twenty one times.

Enraged by his mother’s grief, he took a vow that he would rid the earth of all Kshatriyas (warrior caste) 21 times. So it was and he annihilated all Kshatriya warriors, including Kartivirya Arjun, from the face of the earth. The only Kshatriyas who survived were the ones who were still in their mother’s womb and yet unborn.The mighty and multifaceted Parshuram was an ardent devotee of Lord Shiva.

When Ram broke the bow of Shiva at the Sita Swayamwar, there was a loud resounding sound that reverberated through the earth and heavens. Parshuram recognized the sound and was furious that bow of his beloved Shiva had been broken. With murder on his mind, he traced the location of that sound and reached Janakpuri. He did not know at the time that Ram was in fact the incarnation of Lord Vishnu.

Livid with anger, he began to berate Ram for having dared to touch the bow of Shiva. His anger riled the quick-tempered Lakshman who could not bear the rude treatment of Ram, and he spoke excitedly to Parshuram.

But Ram, ever simple, polite and decorum personified did not lose his temper and remained calm and respectful. His demeanor made Parshuram realize that he was not dealing with an ordinary mortal.

To test him however, he handed his own bow to Ram and asked him to string it. As soon as Ram touched the bow, it was instantly strung of its own accord. This made Parshuram realize that Ram was none other than an Avatar (incarnation) of Vishnu. He apologized to Ram. When Ram was holding the bow of Parshuram, all his extraordinary energy and aura then flowed into Ram’s body.

Parshuram then requested Ram to leave him enough ‘tej’ (spiritual energy) to reach his home on Mahendra Mountain. Ram granted him his wish and bade farewell to him. Parshurama was a Chiranjeevi (who was ordained to live in all the four Yuga’s or eons of Hinduism). It is thus believed that to this day he is still to be found on Mount Mahendra, seated in a deep meditation posture. According to some Puranic stories, Parshuram is a part incarnation of Vishnu.