Sagar Vandan,Sacrifices have their own stories and purposes. Some make sacrifices to achieve a bigger goal while some sacrifices are made for societal welfare, sometimes man makes sacrifice/s for a cause; and then there are legends who sacrifice themselves leaving behind all the illusions and materialism and become selfless for their love and devotion towards God.

This is the legend of Bali, a daitya but a benevolent king who always look after the causes of his people. He was an ambitious king who not only aspired for the throne of Indra, but actually defeated Indra and his deva-army with his valor and captured the throne.

On his guru’s counsel he organized a grand yagya that would instate him as Indra forever. There, on the request of Devas, Bhagwan Vishnu arrived, in Vaman’s form in order to test Bali’s genuineness.

When Vaman request for land that he could set his foot upon for three paces, Bali consented. It was then Vaman enlarged himself in gigantic proportions and he stepped from heaven to earth with the first step, from earth to the netherworld with the second; and then there was nothing left to set his third foot on, embarrassing Bali to not able to fulfill his promise.

Bali had realized the true nature of Vaman and humbly bowed in front of vaman and offered himself. Lord Vaman was immensely pleased; he set his first foot on Bali, placing him as the ruler of the netherworlds and granting immortality.

But the story doesn’t ends here, Lord Vaman gave one more boon to Bali; after the end of Kaliyuga, next Chaturyuga will commence and Bali will be the next Indra. Before it gets your minds wondering, let us learn about Hindu Timelines. We are at current living in the age of Kaliyuga, followed by Satyuga, Tretayuga&Dwaparyuga; henceforming a Chaturyuga.

When 71 Chaturyugas are passed, it constitutes a Manvantara, i.e.lifespan of a Manu, the progenitor of humanity. At current, we are living in Vaivasvat Manvantar, the 7th Manu. With the end of current Kaliyuga, it will be the end of Vaivasvatmanvantar and the 8th Manu, i.e. Savarni Manu will start the Satyuga.

Now, the concept of Indra.Indra is actually a title and whoever is worthy to bear such great responsibility, is instated on the throne of King of devas. The current Indra is son of Kashyap&Aditi, Shakra. And hence the next will be Bali, as per vaman’s blessing. It also clears a misconception, even a daitya/danava can attain such title (here as Indra), if he’s worthy; it was never about your birth, but your KARMA. It is since then that a sacrifice made was termed as ‘Balidaan’.

ChaitraNavratri: We are approaching towards one of the major festivals of Hinduism, the c. The festival of ChaitraNavratri which specifically means “Nine nights” (Nav = Nine, Ratri = Nights), occurs four times in a year, Sharad/ Ashwin (September-October); Vasant/ Chaitra (March-April); Magh(January-February); Ashadha (June-July).

While the former two are more famous and celebrated nationwide in festivity with customs and traditions depending on the region; the latter two are rather incognito also known as ‘guptnavratra’ worshipped by the followers of ‘Shaktism’ in a discrete form or manner. There’s one more thing notable about the Vasant/Chaitra

Navratra that it heralds the beginning of the Hindu New Year based on the VikramSamvat. People all over nation celebrate BhartiyaNavSamvatsar (Indian New Year) depending upon the regions viz. NavSamvatsar in North India, GudiPadwa in Maharashtra, Ugadi in Andhra Pradesh, Yugadi in Karnataka, PoilaBaishakh in West Bengal, Bihu in Assam, while the Konkanis and the Sindhis observe the occassion asSanvsarPadvo and Cheti Chand respectively.

May the blessings of Bhagwati be upon you. Stay good, be the good and inspire goodness everywhere; see you next month.

Mahavir Jayanti: The most important festival for the Jains; commemorating the birth of Mahavir, the 24th and the last tirthankar. On this day, his idol is carried out in a chariot, while the devotees chant his name in jubilance. 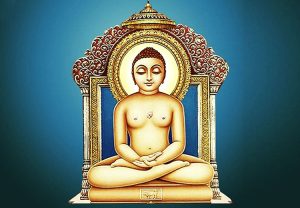 Hanuman Jayanti: HanumathJayanti, the birthday of pawansut Hanuman, the ardent devotee of Shri Ram who defined bhakti and took it to a level where other devotees can only look with admiration. The event is celebrated on the 15th day of the ShuklaPaksha, during the month of Chaitra (the ChaitraPournimaa), six days followed by Ram Navami.

The devotees visit temples and apply tilak of sindoor/vermillion to their foreheads that they take from Hanuman’s idol (Hanuman’s idol is coated with vermillion).

The chanting of Hanuman Chalisa; Bajrang Baan &SundarKand are considered auspicious to receive blessings from the immortal deity.Curious to know more about our festivals, visit our website and scroll through the SanatanFestivals blog to learn the vast heritage of Bharat and its historical relevance.