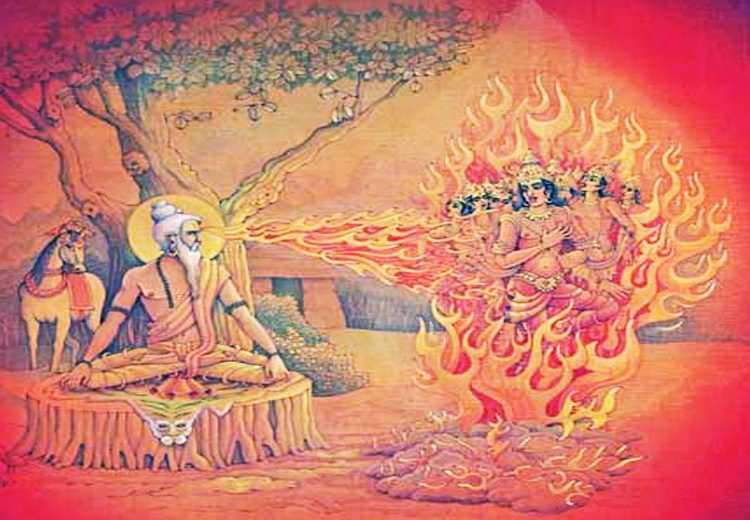 King Sagar was from the famous Isvaku lineage of Ayodhya. King Bahuka was the father of King Sagara. King Bahuk was vicious, but at the same time very ambitious. With the help of Taljandhas and Shakas, Bahuk had snatched away the kingdom of Haihaya family. On getting an opportunity, the Haihayas attacked Bahuk and took back their kingdom.

Bahuk got very depressed with this attack and went away into the jungle with his wife Yadavi. Bahuk’s other wives were jealous of Yadavi and so they poisoned her. This poison confined the child in the womb for seven years, and in the interim Bahuk died. The pregnant wife wished to ascend his pyre, but just then Bhriguvanshi (of Bhrigu lineage) Sage Aurva came there. He sympathized with Yadavi and took her away to his Ashram. Sage Aurva forbade her to end her life predicting that she would give birth to a valiant universal monarch.

“When the child was born, Aurva gave him the name of Sagar (SA, ‘with,’ and gar, ‘poison’). ”Sage Aurva gave Sagar the knowledge of the Vedas (the sacred scripture of the Hindus revealed by Brahma and arranged in the present form by Vyasji namely-) and also gifted him with the extremely powerful weapon Agneyastra (fire weapon). ”Even the Devtas (deities) were afraid of this weapon.

With the help of the Agneyastra, King Sagar defeated the Haihaya Kshatriyas and got back the lost kingdom of his father Bahuk. He later won over the whole world and also removed the religion of Taljandhas and Shakas after defeating them. King Sagar had two wives, Sumati, the daughter of Kashyap, and Keshini, the daughter of Raja Vidarbha.

According to the story of King Sagara and his 60,000 sons as said in Mahabharata, Queen Sumati observed penance in Aurva Muni’s ashram to get a son. ”From her womb a Tumbi (a small pot of hollowed gourd) full of seeds (nucleus) was obtained. King Sagar took out the seeds and put each one individually in a pot full of ghee. These grew in to embryos and sixty thousand sons were born.

”With a desire to win over the world, King Sagara performed an Ashvamedh Yagya and let the horse of the yagya loose for world conquest. Lord Indra got nervous over this and he thought that King Sagar wanted to take away Indra’s stature by performing this “Ashvamedh Yagya”. So he stole the horse of the yagya and left him outside Kapil Muni’s ashram. When King Sagar’s 60,000 sons reached Kapil Muni’s ashram while searching for the horse, and seeing the horse standing outside the ashram they thought Kapil to be guilty of stealing their horse.

Neither Anshuman nor his son Dilip was successful in this task.  But Dilip’s son, Bhagirath was determined to get this task done .”He started meditating intensely for several years and finally Ganga got pleased and descended to the earth. To prevent the earth from flooding, Lord Shiva received Ganga in his matted locks.  King Bhagirath then worshipped Lord Shiva, and finally Shiva blessed him and released Ganga from his locks in seven streams.  The water of Ganga touched the ashes of sons of Sagar, whose souls were liberated.