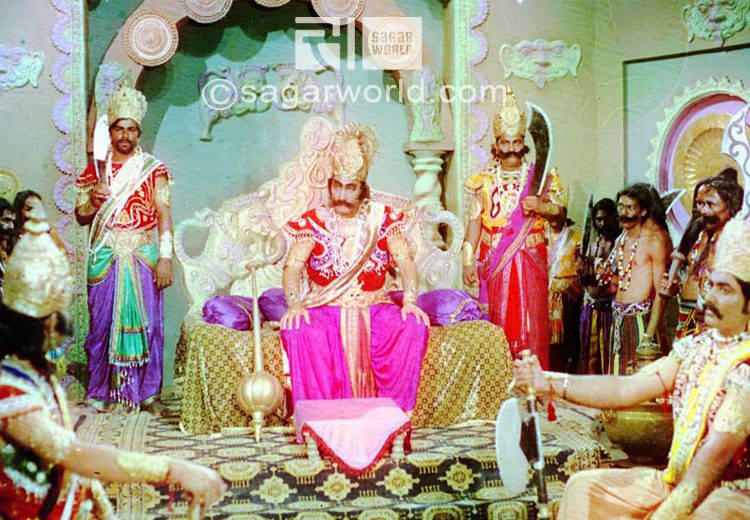 Demon Khar and Dooshan in their assembly

Khar and Dooshan were cousins of Raavan . Khar was the son of the sister of Kekasi (Ravan’s mother). Khar was the King of Janasthan. He protected the northern kingdom of Lanka on the mainland, and his kingdom bordered the Kosala Kingdom, the kingdom of Ram. He was well-known for his superior skills in warfare. Khar and Dooshan lived in Janasthan with their sister Shoorpankha. Khar had two sons, Makaraaksh and Vishaalaaksh.

During their exile in the forest, Ram, Sita and Lakshman came to the Dandaka forest. The sages told them about the constant menace they faced from the rakshasa’s. Ram assured the ascetics that he would soon get rid of all rakshasa’s there.  Then Shri Ram began to live by the River Godavari, at Panchvati, in a simple rustic hut.

Immediately a brilliantly Sun-like chariot appeared there, with glittering horses. That chariot was enormous; like a huge mountain, with gold wheels, gem-studded shafts and was decorated with jeweled birds, flowers, trees, mountains etc. Inside were all kinds of weapons.Khar ascended that chariot and ordered his army to head towards the place where Ram lived. First the army headed there, and then Khar started behind them.

When Khar’s army started out, many bad omens appeared. First there rained down red water as if blood was falling from the clouds. His horses could not proceed. A vulture perched on the flagstaff of Khar’s chariot. Animals and birds started crying in the east. Vultures, jackals and eagles also started howling and crying.

Rahu also came to swallow the Sun untimely [It was not the day of Amavasya (new moon)] and the day darkened. Wind started blowing fiercely. Fishes hid away in their ponds. Lotus flowers withered. Meteors fell down from the heavens. Even the Prithvi shook. Khar’s voice changed and to whichever side he looked at, his eyes filled with tears.

But the foolish rakshasa refused to turn back and said “I do not believe in these bad omens, because mighty people do not bother with the weak. If I want, I can bring down the stars from the sky with my arrows.I can even kill Death. I cannot return without having killed Ram and Lakshman. My sister will be delighted to drink their blood after they have died. You know that I have not been defeated by anybody. When I can kill even Indra, then what are these two men to me?”

Then, a fierce battle was fought. First, Dooshan was killed by Ram and then Trishiraa. Khar got scared with the death of Dooshan and Trishiraa and was saddened on the destruction of such a large army. Still he proceeded towards Ram with his bow and arrows.

Khar used Naaleek (tubular), Narach (iron arrows) and Vikarni (crescent-edged arrows) named arrows at Ram. Ram shot six arrows – one at Khar’s head, two at his both arms and three crescent-like arrows at his chest. Then he shot 13 Narach (iron arrows) – one arrow at the yoke of chariot, four at his four horses and eight at his Sarathi’s head.

Then with three arrows Ram broke his chariot’s shaft, with two arrows the axle, and with 12 arrows Khar’s bow. Seeing himself without the chariot and charioteer, Khar came down with his Gada in the battle field. And he uprooted a Shaal tree from nearby and threw at Ram.Ram cut that tree with the shower of his arrows.

Then he shot a thousand arrows at Khar, Khar got wounded and bled. He ran again towards Ram. This time Ram shot an arrow (Paavak or Agni arrow) at his chest and he fell on the ground lifeless.

Khar was being cursed by Shiva, and he would be released from his curse by being killed by Ram, the son of Dasharath. In the Shesh Dharma of Mahabharata, in the discourse between Bhishma Pitamah and Yudhishthir, it is saidame Khar, Dooshan, and Trishiraa Rakshas, through the curse of Shiva. that Sage Yaagnavalkya had three sons – Chandrakaant, Mahaamedhaa and Vijaya.

The first one, Chandrakaant, is Khar. The disciples of the three Brahman scholars were fourteen in number, and they also became Brahm Rakshasas. They were sent to fight with Ram in the beginning.On listening to Shoorpankhaa, Khar came to know that Vishnu had incarnated in the form of Ram, and thus he wanted to get released from his curse by being killed by Ram and so he first sent his 14 Rakshas, who had been their 14 disciples, and later those three brothers also followed them, and thus got released from their curse.

Kevat – the ferryman who take god across the river

Kevat - the ferryman who take god across the river