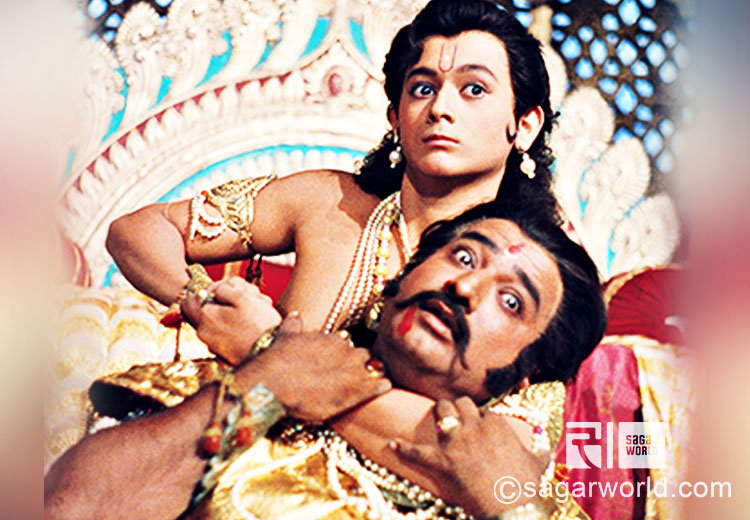 Kans, along with Chanur and Sattyak (King’s priest) was discussing a plan to kill Krishna. Kans wanted to kill Krishna as soon as He entered Mathura. But Chanur said, “It is not right. This time, there is no king present in Mathura who has come to attend the Dhanuryagya. If Krishna is killed right now, then the subjects will revolt.

The best thing right now is to give Krishna a warm welcome and let him stay. Afterwards, at the right time, he will be killed.” The people of Mathura were very happy to welcome Krishna; the savior to relieve them from the atrocities of Kans had arrived.

There in the prison, Vasudev and Devaki had become impatient to see their son. According to Chanur’s plan Krishna was welcomed and made to stay in a guest house. After sometime,

Krishna and Balram went out to see the city of Mathura. There they meet ugly Kubja. Krishna knew about the pious feelings of Kubja.

With Shri Krishna’s touch, Kubja was transformed into a beautiful lady. Kubja got deliverance and she bowed to Krishna with great devotion.

Shri Krishna and Balram visited the Yagyashala (a canopy created for the performance of sacrifice) where Krishna broke the bow.

On getting the news of the breaking of the bow, Kans got frightened. Then Sattyak explained to him that he should now go into the refuge of Krishna and his deliverance was in doing this.

Kans got very angry and said, “You were also a part of the plan to invite Krishna on the pretext of Dhanuryagya and now you are telling me to go in his refuge?”

Sattyak said, “But I had also said that if there is any hindrance before the yagya starts, then it will be obnoxious for you.” Angry Kans did not listen to him and put him in the prison.

Shri Krishna and Balram left for the Yagyashala. On the way, according to Chanur’s plan Kubal the elephant who was drunk came to crush them but instead Krishna killed him.

The deities in the devlok praised Krishna. Shri Krishna also consoled the deities that he would kill Kans. Krishna and Balram reached Kans’s court.

Kans praised their valour just for a show and to test their valour asked them to fight with his wrestlers. Krishna and Balram had a fight with the wrestlers and killed all of them including Mushtik.

They also killed Chanur. In the end, Krishna killed Kans also Shri Krishna and Balram met their parents in the prison.

Krishna told them, “All these years we could not serve you but now for the rest of the life we will serve you then only our lives will have a meaning.” Vasudev and Devaki were freed from the prison.

Krishna released King Ugrasen also the prison and offered him to take over as King of Mathura. Ugrasen asked Krishna to sit on the throne but Krishna replied, “You were the king of Mathura and you only will remain the king.

I will be at your service.”Ugrasen was throned the King of Mathura and the coronation ceremony was celebrated with great pomp and splendor, everyone was happy that Kansa is killed.