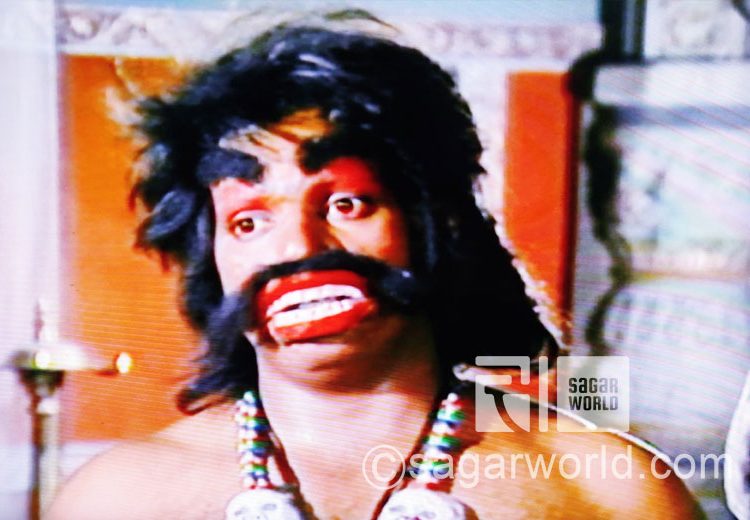 Kalnemi was a Rakshasni (demon) with miraculous powers. He was one of the main ministers in Ravan’s court. His spies told Ravan that Hanuman was going to fetch the Sanjeevani herb to revive Lakshman who had been made unconscious by the Shakti (weapon) used by Meghnad.

Ravan ran to Kalnemi at once. He woke him up and told him to use any ruse or magic he had to stop Hanuman on his journey and kill him so that Lakshman would die untreated by dawn. At first Kalnemi tried to dissuade Ravan.

He said, “This vanara (monkey) had set your entire city of Lanka on fire, how can anyone hope to kill him? It’s impossible.” This made Ravan very angry and he threatened to kill Kalnemi if he did not obey him. But on the other hand, if he stopped Hanuman from fetching the Sanjeevani herb, he would receive half of Lanka as a reward.

Kalnemi thought to himself “It is better to die at the hands of Hanuman rather than at the hands of Ravan.” He set off to stop Hanuman. On Hanuman’s path, on a mountain, he magically created an ashram with fruit-laden orchards and flowering trees. Kalnemi sat there in the guise of a Brahmin (holy man) in meditation and when he espied that Hanuman was approaching he began to sing praises of Ram.

Thinking he was a devotee of Ram, Hanuman paused on his way. Kalnemi said, “I know you are an envoy of Ram, by the power of my yogic energy. You will surely succeed in your venture. But you must be tired, so refresh yourself in the pond and come to me, I will teach you a wonderful mantra.”Hanuman went to the pond to drink water but a huge crocodile caught hold of his foot. Hanuman clamped its mouth underwater and killed it. But as soon as it died, it turned into a lovely apsara.

“That Brahmin is really the Rakshasa Kalnemi”, she told him. “I too was a Rakshasni (female demon). We were earlier a Gandharva and Gandharvi (celestial couple). One day we both laughed at Durvasa Rishi, and he cursed us to become Rakshasa (demons).

When we beseeched him for mercy, he told us that “At the end of Tretayug, when Shri Ram appears in human guise, Hanuman will go to fetch the Sanjeevani, he will kill you both on the way there, and free you from your curse so you can return to heaven.

”I am now free, but please also kill that false Brahmin too, so that he can be free too.” Hanuman went back to the Brahmin and requested, “Take my guru dakshina (fees for teaching), then give me mantra diksha.”(the ceremony of giving a holy sound to someone).” He grabbed Kalnemi’s leg and threw him off the cliff. With a loud cry of “Jai Shri Ram!” on his lips, Kalnemi died and resumed his Gandharva (celestial) form. He went to heaven and Hanuman continued on his way.

Kali - The Furious form of Durga