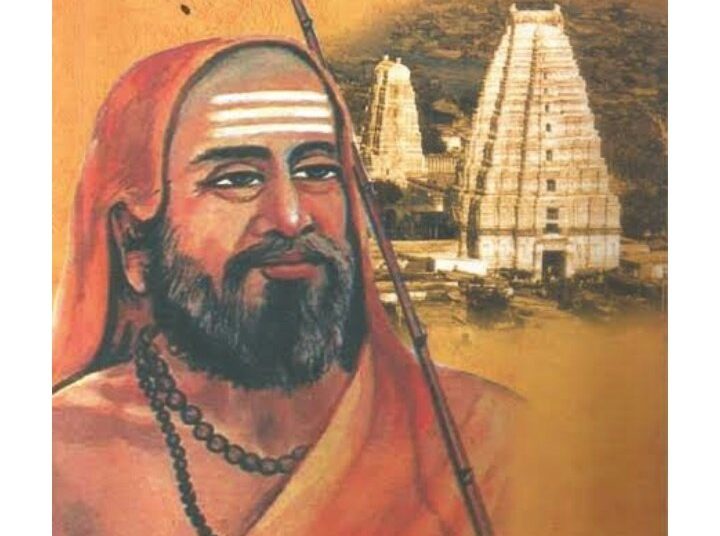 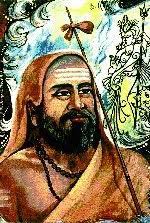 After the attack by the cruel Muslim kings, Prataprudra was defeated and the Muslims started forcefully converting people into Islam. Muslims also forced to convert Harihara and Bukka to Islam but they were the ones who would give away their life for their religion and so these two brave people managed to escape.

That time, Shri Vidyaranya Swami who was in penance at Matang Mountains, came to know about these two with his spiritual power. He asked Harihar and Bukka to establish Hindu rule to protect themselves from the atrocities of Muslims.

By the orders the Guru, both of them went in search of a place to establish Hindu rule. At one place, they saw that a rabbit was making a dog run. When they told Vidyaranya Swami about this place, Shri Vidyaranya Swami told them that it was the place where they should establish their rule.

After this, Vidyaranya Swami, who also had great knowledge of astrology, made them lay foundation stone in a good muhurat (hora). It was the miracle of Shri Vidyaranya’s spiritual power that with his blessings Vijaynagar’s reign went on progressing and they became a protector of Hindu religion and culture.

It is said that because of the attacks by Muslims on Hindu religion, to establish a Hindu state Shri Vidyaranya  Swami performed tough penance and attained a boon from Bhuveneshwari Devi (Goddess of earth) for a Hindu state that would rule for two hundred years. He had met Harihar and Bukka Raya after gaining this boon.

There is no proper information available regarding the life of this saint who sacrificed all his penance power for the security of Indian culture and religion but it is sure that he was present on this earth between 1300 and 1391. Few people believe his birth year to be 1268. He was born in Pampa region, which is known as Hampi today. As such, there is one more opinion that he was born in Warangal, which was known as Ekasila Nagari.

In the Parashar Smriti annotation, from the introduction that he has given for himself, it can be known that he was born in the Brahmin family of Taittriya branch. His father’s name Mayanacarya and mother’s name was Srimati Devi.

He had two brothers- Sayan and Somnath. It was this Sayan who became famous in the name of Sayanacharya who wrote Ved- Bhasya (annotation on Vedas). Somnath had also become an ascetic and because of his spiritual eligibility, he became the jagadguru (respectable person) of Shringeri Sharda peeth.

From the evidences available, it is accredited that Shri Vidyaranya had become an ascetic at a very young age. After becoming an ascetic, he has traveled to pilgrimages and one of them being Kashi.  It is said that in Badrikasharam, Swami Maharshi had personally taught him Shri Vidya. After his brother, even he was appointed on the post of jagadguru at Shringeri Sharda peeth. His tenure was for six years. Till his death, he remained on this post.

Shri Vidyaranya Swami was a great saint, which can be clearly seen through the books written by him. After Shri Aadi Shankaracharya, he was the greatest philosopher of Advait theory.

He built many temples and maths, which got donations in huge amounts and continuous security from the King of Vijaynagar at Shri Vidyaranya’s orders. He talked to the Kings and rebuilt the temples that were damaged by the Muslims and installed the idols once again. He made arrangements for ceremonious pooja at Shri Rangam and Madurai temple where the poojas had been stopped.

The golden idol of Sharada Mata that is prevailing in present day at Shringeri Peeth has been installed in Shri Vidyaranya’s time. His brother was the head of the math then. Before this, there was a sandalwood idol installed by Shri Shankar.

When Shri Vidyaranya Swami became the chief head of Shringeri Math he contributed a lot in the progress of the math. As such he was the head only for six years but before that since he was always in contact with the math, he worked continuously for the progress of the math. He is considered as one of the most important math heads who created a strong position of the math in the development of Sanatan dharma.

The greatest teacher of Sanatan Dharma (Hindu religion), Shri Vidyaranya Swami is one of those saints who had all his life used all his spiritual powers and strength for the protection and progress of Hindu religion. Till the time Hindu religion prevails, Shri Vidyranya’s Swami implements will always be remembered.