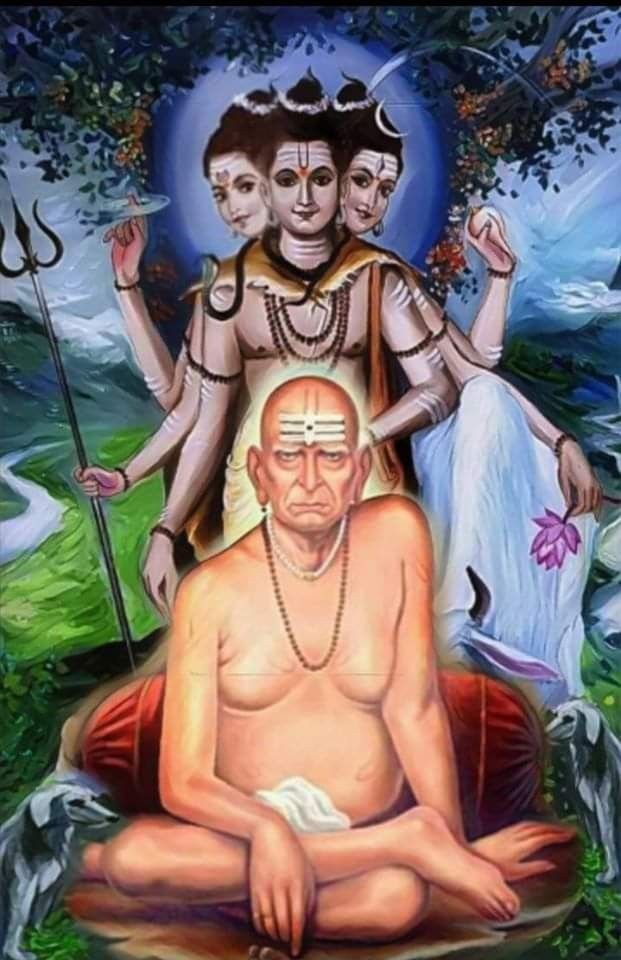 In the 14th – 15th centuries, Shri Nrisingh Saraswati with his conduct, diverted the Brahmins from the path of truth. He got the people of the lower class into a society free from their pain and trouble and got them on the path of devotion to the extent that he also influenced Muslims and rulers of those times. After this, completing his work in this form on earth, Shri Nrisingh Saraswatiji went underground in Patalganga in Isavi San 1459 and then to Kardalivan. From Kardalivan, he went to a lonely jungle north of Bhagirathi and sat in contemplation. Because of unmoved contemplation for a long time, the anthill came up on Shri Guru’s body. All of his body was covered with an anthill. One day, after 300 years of contemplation, a woodcutter came there to cut wood. Just as he stroked with his hatchet, it struck Guru’s thighs. Because of the blow of the hatchet, his thighs started bleeding. With this, Guru’s contemplation was interrupted. He got up. The woodcutter got frightened, but Shri Guru forgave him and he manifested in the form of Swami Samarth. The mark of this hatchet was there on the thigh of Swami Samarth. 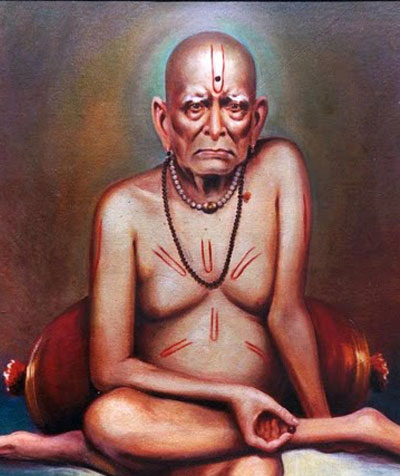 After an interruption in his contemplation, Shri Guru went to Gangotri. From there, he reached Devalgram. After installing his footmarks there, he left. Then he reached Rajur village in Marathawada. Here, he built a monastery. He later abandoned the math. From there to Udipi and via Pandharpur, in San 1838, he appeared in Mangalvedha. During this tour, he became famous as Chanchalbharti. People in Mangalvedha used to call him by the name Digambar Swami.

Shri Swamiji lived in Mangalvedha for around twelve years, but here he lived in solitude, away from people. There is a Patvardhan in this town where he lived many times. By chance, if he came to the village, he would sit in a dirty place. Some called him Pagal Bua (mad person) and some, Digambar Bua (naked person). But slowly and gradually, people got impressed with his powers and started looking at him with devotion.

Once, he reached by walking from Mangalvedha to a nearby village, Mohol. After spending some time here, in 1854-55, he came to Solapur. Here, Chintopant Appa Tol became his devotee. At Tol’s invitation, in 1856, Shri Swamiji came to Akkalkot and stayed there till the end. As he lived in Akkalkot till the end of his life, he became famous as Akkalkot Swami or Akkalkotniwasi Shriswami Samarth Maharaj.

Shri Swami was a great ascetic with divine splendor. Such a divine light used to flow out of his body that people could not stare at him. He was fair, with a long nose, a huge body, a broad chest, and lotus-like feet. He always made a mark of sandalwood paste on his forehead and arms. Shri Swamiji wore a Kaupin (a small piece of cloth to cover his private parts). Sometimes, he would take off his clothes and move around naked. Sometimes he used to wear an ear cap. Sometimes, a robe used to be worn. Shri Swamiji was very straightforward by nature. He used to grace everyone without differentiating by caste, religion, or gender.

Shri Swamiji was an ocean of knowledge. Many great scholars’ egos used to break off in front of him. Just by keeping his hand over a mad child, he would make him speak the Vedas, Upanishads, and Gita. He strongly opposed casteism.

Normally, Swamiji talked very little. Many times he liked to keep mum. He spoke Marathi and also Sanskrit. He was very blunt in talking and showed bad words at times. Whether it was a rich man or a woman, he would bluntly speak in front of everyone. There was an allusive meaning in his speech.

As he was the incarnation of Lord Dattatreya, Swamiji had all the powers. He used to fill up a dried well with water, cure an incurable disease within seconds, make a poor man rich immediately, stop death and bring life to a dead person. Shri Swamiji performed infinite miracles during his life. Sometimes just for the sake of it or sometimes to favour his devotees. There are an infinite number of people living their lives with his grace. Shri Swamiji is the father of orphans, the protector of the unprotected, and the strength of the weak. Whoever has gone to the refuge of Swami, goes to him even today as he knows that Swamiji will take away his burden.

From an ordinary man to a rich man, Swamiji had an infinite number of followers. The kings who were his followers were: King of Akkalkot Maloji Raje, Gwalior King Jayajirao Sindhiya, King of Indore Tukojirao Holkar, King of Baroda Malharrao Gayakwad etc.

Shri Swamiji had many great people as his disciples. To name a few: Shri Krishna Saraswati (Kumbhar Swami), Swami Nrisingh Saraswati of Alandi, Vamanbua Vamorikar, or Badodekar, Gajanan Maharaj of Shegaon, and Saibaba of Shirdi. 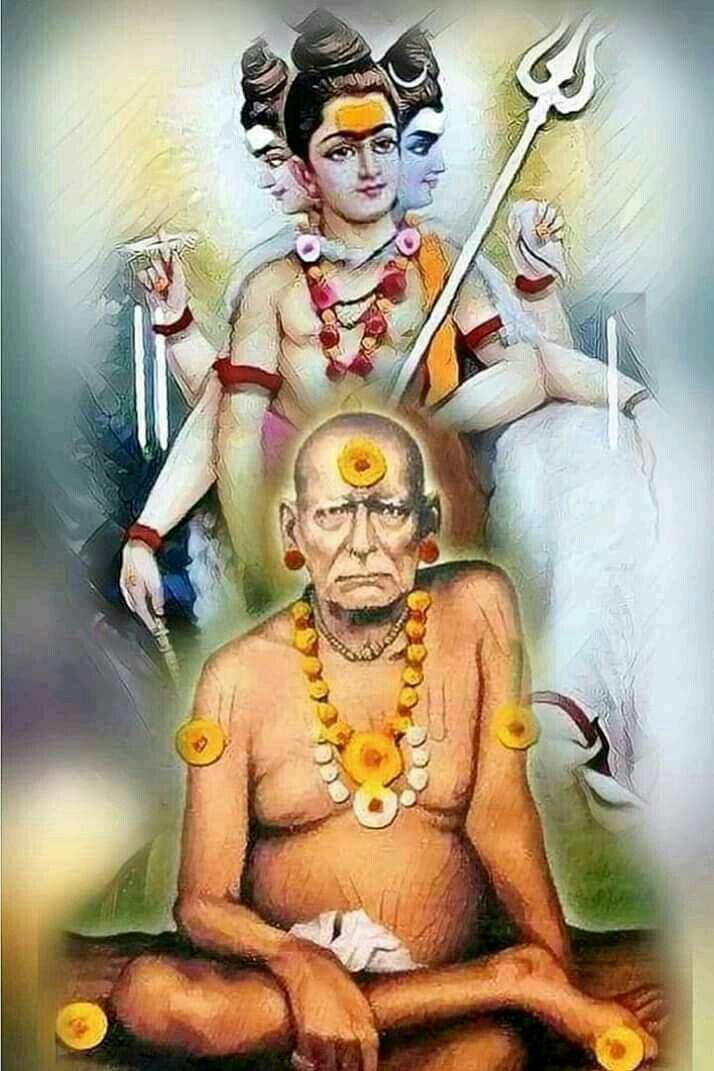 There were the complete luster, power, and virtues of a lord in the incarnation of Shri Swamiji. It is difficult to describe these in words. One can only feel these with pure devotion.

After doing good to many of his followers, on the thirteenth day of the dark fortnight of Chaitra month and on April 30, 1878, Shri Swami Samarth left for his heavenly abode. He kept on reciting Lord Shiva’s name eight days before his death. After his death, a divine airplane of flowers was made. Flowers were showered. Everything that was used in a royal procession was present at his funeral—elephants, horses, and an umbrella. Every devotee who heard about his death ran to pay him his last homage. Swamiji’s tomb was established at Chollapa’s house, where Swamiji had first made his stay.

After his death also Shri Swamiji had given his darshan to many of his devotees and even today he gives them darshan. Apart from Akkalkot, Swamiji’s temples are present in many other places. Swamiji is present at every place. It is only a matter of a devotee to call him- Swamiji graces him anywhere and anytime.