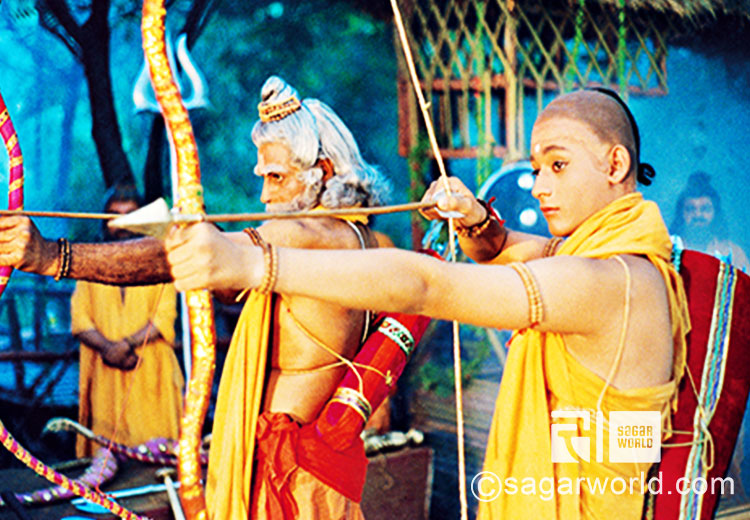 After the marriage, Ram came to Ayodhya. King Dashrath decided to appoint him an heir apparent and coronate him. Just then queen Kaikeyi’s maid servant Manthra insinuated her, “If Ram will become the king, then your son Bharat will remain his servant and your status will be that of a maid.” Due to Manthra’s deception, Kaikeyi asked for two promises from king Dashrath.

The first one was that instead of Ram, Bharat should be coroneted and the second was to send Ram on exile for fourteen years. King Dashrath was commited for this so he was forced to agree to Kaikeyi’s terms and conditions.

Ram left for the jungle to keep up to his father’s promise. Sita and Lakshman also joint him. Perplexed with Ram’s separation, Dashrath died.

While dwelling in the forest, Lanka King Ravan kidnapped Sita. While moving around in search of Sita, Ram reached the Kishkindha city where he met monkey king Sugriv. Sugriv’s brother Bali had thrown him and his wife out of the state and taken possession of the state.

When Ram came to know about this, he killed Bali. Ram and Sugriv became friends. Sugriv sent monkeys in search of Sita. Hanuman reached Lanka and searched for Sita, when he met Sita, he told her that he was Ram’s devotee.

Hanuman met Sita in the Ashok Vatika in Lanka where Sita was locked. There, he had a fight with a few demons. Hanuman, with a trick became captive. Hanuman’s tail was ignited by Ravan’s order.

\With that fire, Hanuman burnt the Lanka city and returned to Shri Ram and gave him the news of Sita. Under the leadership of Ram, Sugriv formed a monkeys’ army and attacked Lanka.

A fierce battle was fought. In the war, Ravan’s brother Kumbhkarna and son Meghnad were killed. In the end, Shri Ram killed Ravan too. He returned to Ayodhya with Sita. The people of Ayodhya were very happy and Ram was crowned the King. The deities praised Ram.The story of Ram avatar (Ram’s incarnation) got over.

After telling these stories of Vishnu’s incarnation, Sandipani educated Krishna and Balram on to protecting the religion. Later gave them the knowledge of divine power and all weapons.

Guru (teacher) also gave them extra knowledge to travel in the form of a minute body.Guru Sandipani was very sad. His son had passed away with the waves of the ocean and due to this he and his wife were very sad. 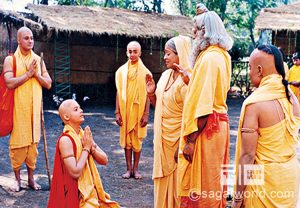 Krishna consoled his teacher and told him, “May be your son Punardatt has not died and with the flow of water he has stopped along the coast somewhere. Please be patient, I promise you, I will get back your son one day. This will be the Gurudakshina (fees paid to a spiritual preceptor) from me.”

On hearing this, the guru and his wife were consoled.  Krishna came to the sea coast and called for the sea God; he manifested and told Krishna that his teacher’s son had been taken away by a demon named Panchanan into the Patal lok (the land underneath).