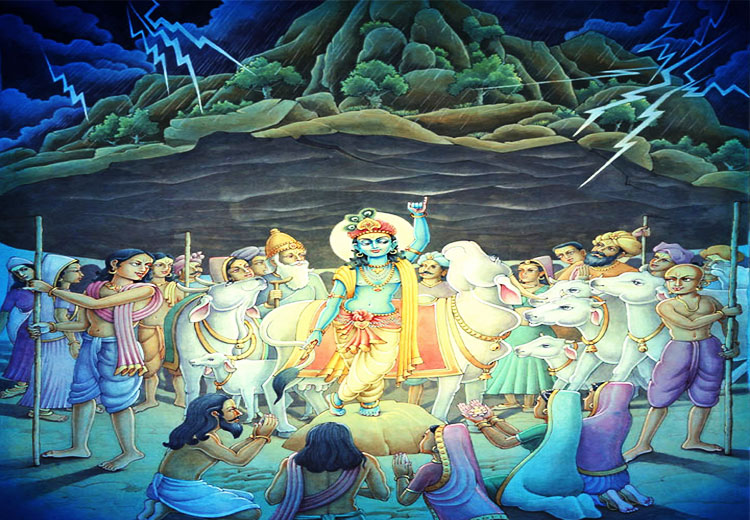 Kans was very much worried when he heard the story of Kaliya being destroyed. The main reason of his worry was till now that he was not sure whether Krishna was Devaki’s eighth child or not. He wondered if the eighth child was elsewhere. He thought to himself if he was simply wasting his time to get Krishna killed? Chanur advised him that if he wanted to know the truth he must kill Vasudev and Devaki first. If Krishna was their child, he would definitely be brought to Mathura for their cremation. With this thought, Kans went to the prison at night and picked up his sword to kill Vasudev and Devaki. Just then Sheshnag manifested and spit flames of poison, distressed and frightened with this, Kans ran away from there.

Nand and Yashoda thought that Krishna had been affected with some evil sight and that is why he was always in some trouble. They went to a family priest Sage Shandilya’s for advice; he told them that in order to let Krishna out of this crisis they must perform Tuladaan (the ceremony of weighing one’s body against gold, silver and afterwards giving the same to priests). Nand, Yashoda and Rohini does preparations for tuladaan.

For the Tuladaan, Krishna was made to sit on one of the pan of the balance and in the other balance, lots of gold, ornaments and jewels were being put, but the pan on which Krishna was sitting, remained heavy. Radha was also present there; she kept a leaf of Tulsi on the other pan and both the pans equaled that surprised everyone present there.

Balram explained that it was to show the divine love between Radha and Krishna. In the heaven, the deities were happy seeing this. People of Gokul were also very happy.

Indra was very angry on hearing about the greatness of Krishna. Lord Indra was egoistic and angry. People of Gokul organised for the puja of Indra. Krishna asked them why they were worshipping Indra; instead they should worship Govardhan Parvat (mountain) because the mountain protected the cows so he was the desired God of the cowherds. People of Gokul listened to Him and worshipped Govardhan.

When Indra heard about this he was very angry and sent for a disastrous cyclone and very heavy rainfall in Gokul. People of Gokul were very frightened, so Krishna picked up the Govardhan Mountain with His finger and protected the people of Gokul under the mountain. On seeing this, Indra’s ego bursts and He apologised to Krishna, worshipped him and went away.

After this act, even Brahmaji started doubting the reality of Krishna. Once He saw Krishna eating food left over by the cowherds He started doubting him more because he thought how a God could eat leftovers. He thought of testing Krishna, so he made the cowherds, cows and calves disappear.

Krishna understood the trick of Brahmaji and with His leela (act), created more cowherds, cows and calves. After sometime, when Brahmaji saw this He was shocked because the cowherds and others that he had made to disappear were already present in Brahmalok, so he wondered where the other cowherds came from.

Brahmaji requested Krishna to clear his doubts. Krishna made him aware with the truth and told him that he himself was God and He was present everywhere, which is why eating leftovers was also an act of God.

Brahmaji’s doubts were cleared and he apologised to Krishna and went off to Brahmalok. Krishna explained to him the vulnerable point that high or low caste all are useless talks, love is above all.

On hearing about the incidence of Govardhan Mountain, Kans was worried. He thought it was a conspiracy by the deities. He wanted to make a new plan to kill Krishna.

Just then Naradji came and informed that Krishna was God himself and was the eighth child of Devaki and he must go in Krishna’s refuge for his betterment. At this, Kans got very angry and insulted Naradji throwing him out of his court.

Here, Akroor secretly went inside the prison and informed Devaki and Vasudev that Nandrai wanted to send Balram to Gurukul for education and that he wanted their permission. Nand and Yashoda did not know the mystery of Krishna’s birth so they only wanted to send Balram to Gurukul. Devaki insisted on sending Krishna also to Gurukul. Finally it was decided that both the brothers could not live separately so it was better to make an arrangement in Gokul only wherein both the brothers would be educated secretly.

In the Golok, Radha asked Krishna, “You are showing more respect towards Yashoda and not showing justice towards Devaki.”

Then Krishna said, “In her previous life, Yashoda and Nandrai had taken a boon of affection in the form of a child from me, that is why I by giving them this happiness for sometime, I am fulfilling my boon.

At the right time even Devaki and Vasudev will also get a chance to shower their love on Krishna. Devaki’s love for me is also great and I am not seeing Devaki’s love any less. I do appreciate her love.” Even Naradji on hearing this was very happy and praised Radha and Krishna.

At this occasion, on Radha’s request Krishna transformed Himself into Radha and pleased Radha. The whole universe was happy at this divine form of love. This was the greatest example of love. Krishna said, “You and me are one and this is the greatest truth of love.”