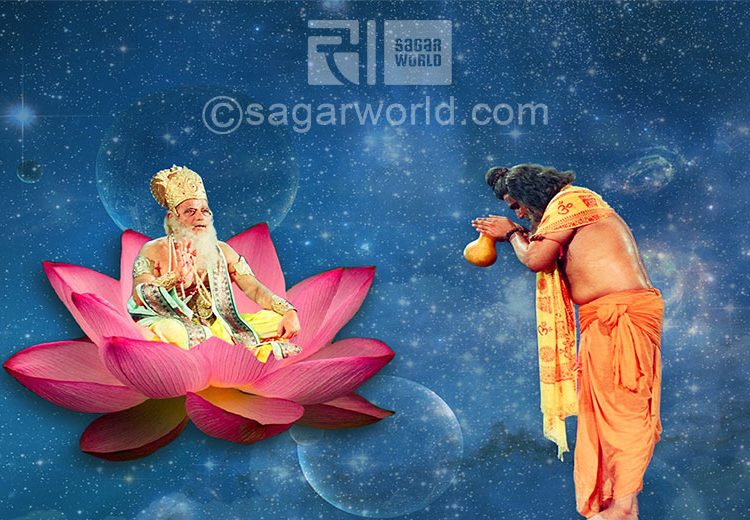 According to the Puranic Lore, at the end of every cycle of creation, during Mahapralaya (the absolute dissolution of creation of the universe i.e. the planets, celestial bodies including the countless galaxies are absorbed into the womb of the ultimate) the entire universe including Brahma the creator of the universe is absorbed back into Vishnu.

Nothing remains except the void. Then MahaVishnu commences the cycle of creation once more. As soon as he contemplates on the creation of the universe while reclining in a yogic pose over the Kshir-sagar (The Ocean of Milk), a lotus emerges from his navel. From the enormous lotus blossoming on the cord from his navel, Brahma then appears.

He finds himself alone in the void. He wants to look around in all four directions and at once, he has four heads, gazing in the four directions. He is now called Chaturmukhi (four-headed, each head representing one Veda). He cannot see anyone else in the void and is disturbed to find himself alone.He descends down from the lotus and tries to climb down the cord or stalk. But it has no end.

He returns to the lotus and wonders: who am I in this enormous emptiness? A celestial voice rings out “O Chaturanan, Adi Purush Bramhaji: Meditate!””Brahma then began to meditate. After an infinite period of meditation, he heard the celestial announcement, “Contemplate the beginning of creation.”

Brahma then contemplated a Purush (a man) in the likeness of himself. Four beings were bornfrom him. They are the four primordial humans Sanaka, Sanatana, Sanandana and Sanatkumara, all in baby form.”Brahma the creator of the universe asked them to create progeny to populate his creations, but they declined to do so, and instead devoted themselves to praying to the ultimate reality. Brahma then contemplated creating Prajapatis, and as soon as he thought of them, Narada, Daksha, Pulatasya, Pralah, Kritu, Vashishtha, Angira, Atri, Bhrigu, Marichi were born.

Among these, all except Narad came to be known as Prajapati’s. On Brahma’s orders, they created progeny. Brahma then made a man and woman, who were called Manu and Shatrupa. Brahma the creator of the universe then gave rise to Dharma and Adharma, Rati & Kamdev.

Kashyap who was the son Maharishi Mareechi/Marichi (one of the original 10 sons/prajapatis of Brahma) was the one who married many wives, each of whom gave birth to a particular species that inhabits the universeBrahma then contemplated creating Prajapatis, and as soon as he thought of them, Narada, Daksha, Pulatasya, Pralah, Kritu, Vashishtha, Angira, Atri, Bhrigu, Marichi were born. Among these, all except Narad came to be known as Prajapatis.

All this creation is a product of Brahma’s contemplation. He was angry that the world was not being populated fast enough. His brows were drawn in anger and from his brows a baby appeared who was crying loudly. As he was in tears – Rudan, he came to be called Rudra (the Crier). He is Lord Shiva. This entire creation was the initial work of Brahma. Later, this was replicated to create other universes.

”Brahma the creator of the universe was born of Rajoguna (one of the three gunas (qualities) of Sattva, Rajas and Tamas), therefore he is considered the Rajoguna Devta, and is the prime cause of the growth of the universe, being the adipurusha (the first being of creation).” 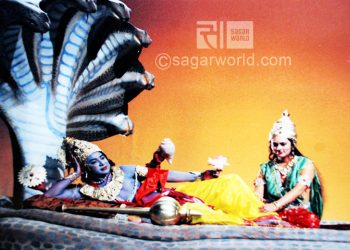 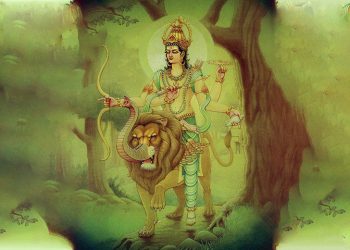 Chandra or Moon God - born from the ocean of the mind