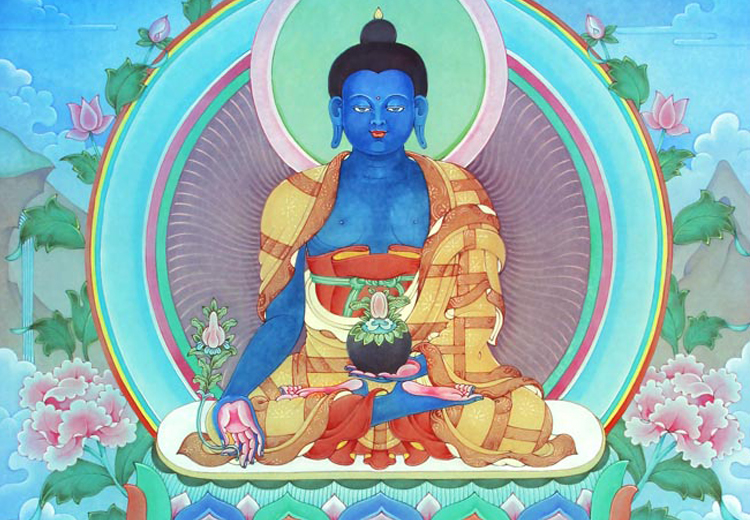 The word Shakyamuni means the sage of the Shakyas, the latter being the name of Buddha’s clan, which ruled over the Republic of Kapilavastu. Shakyamuni Buddha is the historical Buddha known as Gatuam Buddha. Gautam Buddha was born as a prince known as Siddhartha Gautam in present day Nepal. He encountered four sufferings common to all people—birth, aging, sickness and death. To seek their solution, he renounced his family and state and set out on a spiritual journey to search for the resolution of these sufferings. Buddhism is based on the teachings of Shakyamuni.

Shakyamuni Buddha is the founder of the Buddhist religion. He lived and taught in India in the sixth century B.C.E., a time of burgeoning religious and philosophical thought from Greece to China. Born as the crown prince of the great Shakya Kingdom, the young Siddhartha Gautama was groomed to be a king in accordance with the wishes of his royal father. However, when he was about 29 years old, he learned of the deep suffering experienced in life by people. He left his palace life, gave up his fine garments and jewellery in order to find the causes of this suffering and the means to overcome it. After about six years of study, self-deprivation, and deep meditation he finally realized his goal. He had become an enlightened one, a Buddha. After this, he is said to have walked to a deer park in Sarnath (Benares) on the outskirts of Varanasi in India. Here he gave his first sermon, an event which is called the turning of the wheel of Buddhist law (Dharmacakra).

Benefits of having the Shakyamuni Buddha Painting

For many centuries, Lord Buddha paintings have brought in bliss, prosperity, and wealth. A Buddha painting for a home can be the perfect choice to choose a path of serenity. Lord Buddha is the symbol of peace, tranquillity and enlightenment. It is believed that a Buddha potrait removes the imbalances of life and following the principles help in maintaining a healthy, balanced lifestyle. A Buddha painting is also a very positive source of energy and a harbinger of prosperity for the household.

Paintings of Lord Buddha is also considered as a shield against sorrow and negative energy. Placing a Buddha Painting in your office or home can greatly reduce stress and induce a more relaxed mindset, helping you tackle problems without stress.

Here, ‘Shakyamuni Buddha’ is printed on coated matt paper by inkjet printer, using ultra chrome inks with an off-white paper mounting with golden border, and encased inside a fibre frame with acrylic sheet cover in the front.