Samantabhadra – the primordial Buddha – with his consort Samantabhadri 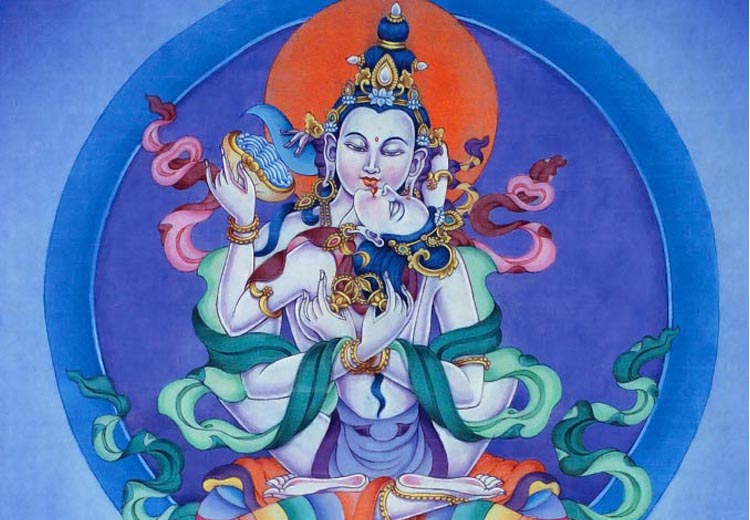 Samantabhadra means the one who is universal worthy. Samantabhadra is the primordial Buddha in Tibetan Buddhism, who give rise to all other Buddhas. He is depicted as blue-skinned, sitting over him is Samantabhadri, his consort and female counterpart. The naked body represents nothingness and formlessness, which is the true representation of Supreme God.

Samantabhadri is a dakini and female Buddha from the Vajrayana Buddhist tradition. She is the consort and female counterpart of Samantabhadra. Samantabhadri is the expression of a concept essentially inexpressible in word or symbol, the ultimate voidness nature of mind. This aspect of the dakini is beyond gender, form or expression.

All evil karma made in the past will either be wiped off or retribution created by past serious offences reduced.

Auspicious spirits constantly protect you and you do not have to experience the disasters of plagues, floods, fires, thieves, armed conflict, or imprisonment.

Evil ghosts and other yaksha-ghosts cannot encroach on you; poisonous snakes or man-eating beasts can not harm you.

Here, ‘Samantabhadra – the primordial Buddha – with his consort Samantabhadri’ is printed on coated matt paper by inkjet printer, using ultra chrome inks with an off-white paper mounting with golden border, and encased inside a fibre frame with acrylic sheet cover in the front.

Manjusri Buddha - the Buddha of Wisdom