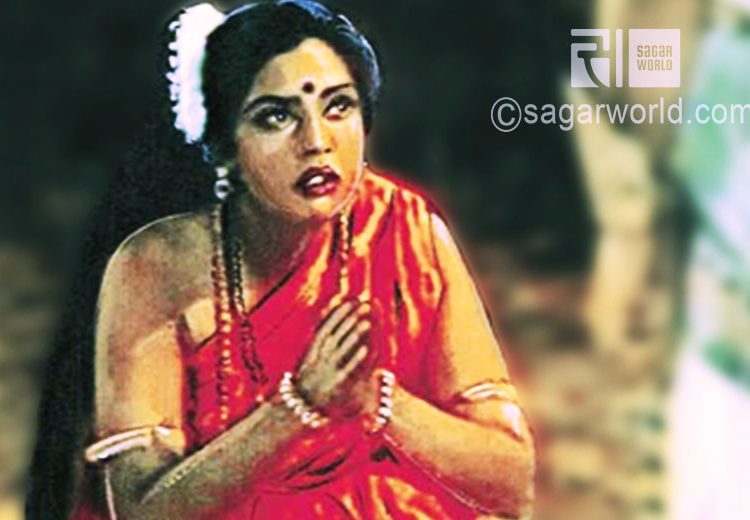 Ahilya is said to have been created by Lord Brahma himself. One day Brahma imagined the most beautiful woman ever, and lo, Ahilya was created. As she possessed unmatched beauty and extraordinary grace, she was called Ahilya.

Even the Gods in the heaven were dazzled by her beauty and fell in love with her. One by one, they approached Brahma and asked for her hand but Brahma rejected all of them. Brahma decided to call on his mortal son Gautama. He put Ahilya in his care and said that look after her till he retrns.

Brahma went away and Gautama continued to look after Ahilya in an innocent manner. When Brahma returned, he found Ahilya to be as pure and innocent as he had left her. Pleased by the ethical behavior of Gautama, he formally gave Ahilya’s hand in marriage to Gautama and she became his wife. Gautama and Ahilya had a brilliant son called Shatanand who grew up to become the royal priest at King Janak’s palace.

But the Gods in heaven had not given up. Indra was ever waiting for a chance to get close to Ahilya. One day he imitated the crowing of a cock at midnight near Gautama’s ashram. The Rishi’s thought it was daybreak and as was his daily routine at dawn, he set off for his morning bath in the River Ganga.

Meanwhile Indra, took on the form of Gautama and crept into Ahilya’s bed. Ahilya was surprised and asked, “O Rishi why are you intent on this impure consummation at this holy hour of Brahma mahurat.” It was then that Indra confessed who he was and walked out of the hut.

Meanwhile Gautama, the real Rishi’s was returning after his morning ablutions. He espied Indra creeping out of his hut like a thief. He cried aloud, “May you become impotent!” Meanwhile Ahilya was trembling from this strange encounter. Gautama cursed her too and said, “May you turn to stone!”

Ahilya begged to be released from this awful curse. Gautama Rishi said when in Tretayuga (one of the four periods the earth goes through each extending for millions of years before creation is destroyed by the great Pralaya (deluge) and started again),

Ram will be born on earth as Vishnu’s incarnation; he will come to the forest to this spot. When a speck of dust from his holy feet touches you, you will be freed from this curse. Gautama Rishi’s went away from there. Ahilya remained as solid as a rock and the ashram soon became a desolate place.

In Tretayuga Ram (one of the four periods the earth goes through each extending for millions of years before creation is destroyed by the great Pralaya (deluge) and started again) appeared as Vishnu’s incarnation. He went to help Vishwamitra to conduct his yagna and attacked the rakshasas Tadaka, Subahu and Mareech who were harassing him.

Along with Ram and Lakshman, Vishwamitra set off for Janakpuri to attend the Swayamvar ceremony of Sita.

On the way, they passed by the deserted hermitage of Gautama Rishi, where the stone form of Ahilya stood amidst the desolate ashram. Vishwamitra asked Ram to touch the stone form with his feet and Ram did so. The stone form transformed at once into flesh and blood human form of the lovely Ahilya.

Filled with gratitude at her release from the curse, Ahilya sang endless praises to Ram and then disappeared to meet Gautama in the heavens. As she had been blessed and sanctified by the touch of Ram’s feet, Gautama accepted Ahilya as his own again.