The Chandra or moon god is the mind of all, the lord of the senses and the emotions and those who worship him assiduously lose their diseases and become happy.

Among the Nakshatra’s (the lunar constellations of the Vedic zodiac) the Moon is the incarnation of God in lunar form, and his esteem is magnified because Shiva, the lord of Mount Kailas, wears the crescent Moon on His forehead.

Some say that this makes Chandra or  Moon god a one-eighth incarnation of the exalted Lord Shiva. Lord of the night, the Moon schedules rituals and is a haven for the ancestors.

As the lord of plants and their growth, the Moon pours the nectar of Soma (nectar of the Gods) into the world’s vegetation, that they may be nourished and that they may nourish others. The Moon is the master of the world’s water and rules the salty taste; he controls the tides and stores and actuates the rain.

Chandra or Moon god shines with the dazzling whiteness of yogurt, conch shell or dew and all foods grow due to his light. He is fair, youthful, fortunate, and watery and his body waxes and wanes. Peaceable and auspicious in nature and appearance, he has a slim but round body, with lovely limbs and is intelligent, sweet and soft of speech, lovely-eyed and wise.

He wears white clothes and white flowers; his metal is bronze or silver and his gem pearl. Chandra or Moon god has a Kapha-Vata constitution, and tends to be fickle. He loves to wander and is a Vaishya by nature. He rules the blood in the body and because he is of the color of semen he is passion-filled.

Whoever seeks sexual satisfaction should worship the Moon. In India, unmarried women are encouraged to fast and pray on Monday in order to attain their desired spouse.

Moon is the Lord of the northwest direction, of Monday and of the constellation Cancer. Because everyone loves him, he is called Friend of the World. The Moon, who is of the nature of Soma, was born from the tears of joy which flowed from Atri Rishi, a mind-born son of Brahma.

It is thanks to Anusuya, the wondrous wife of Atri Rishi, that the Moon took birth in our world. The chief gods of the universe, Brahma, Vishnu and Mahesh tried to test her purity by coming to her as guests and impudently demanding that she fed them naked.

When thus challenged, that intelligent woman changed those puissant gods into tiny babies and removing her own clothes, nursed them from her own breasts before returning them to adult status. Immensely pleased and impressed with Anusuya, these cosmic lords blessed her to enjoy unprecedented children. Brahma’s boon caused the Moon’s birth in this way: the Rishi Atri stood with his arms upraised without moving or even blinking for three thousand years. Then, when his body became thoroughly perfused with Soma, he himself became Soma and rose up into the sky. The Soma juice filled him so full that he overflowed, and Soma oozed from his eyes, filling the heavens with luminosity.

The goddesses of the ten directions gathered to receive that Soma into their collective womb, but they could not hold it for very long. The fetus then dropped to the ground and assumed the form of the Moon, whereupon Brahma placed him in a chariot. The Moon was then worshiped by all the celestials.

Another theory is that the moon emerged from the Samundra Manthan (churning of the cosmic ocean) by the devas and asuras as one of the 14 gems that emerged from that exercise.

He later married all twenty-seven Nakshatras, beginning with Kritika. Although he had twenty-seven wives, all of whom were sisters, the Moon preferred the one of them named Rohini, and remained always with her in her mansion. Anyone who looked up into the skies in those days would have seen the Moon forever full, each night, stationary in the sky in the constellation of Rohini.

The Moon’s other twenty-six wives were not at all pleased with this state of affairs, for they too wanted to enjoy regular sport with their husband and they pleaded with him to visit each of them as well. When the Moon in his great infatuation ignored all their entreaties, they ran crying to their father, the Patriarch Daksha, who twice in high dudgeon warned his son-in-law to behave.

On the third complaint Daksha lost his temper and cursed Chandra or Moon god to deteriorate. Day by day he waned, losing his glow and his juice. No sacrifice would cure him. All the world’s plants stopped growing and soon bereft of nourishment, all living things deteriorated.

The celestials alarmed at the possibility that all life on Earth could succumb to this wasting disease, then interceded for the Moon and Daksha was mollified somewhat by this supplication. Daksha promised the dwindling globe that if he behaved himself he would be curse-free for the first half of each month. Chastened, the Moon now waxes and wanes as he visits each wife once a month, for one day and one night at a time.

Because of Daksha’s curse Chandra or Moon god had no issue by Daksha’s twenty-seven daughters, but he did have four sons by another wife, named Manohara (Mind-Robber). The eldest of these was Varchas, who took birth on Earth at the time of the Great War of the Mahabharata, as that warrior of unprecedented power named Abhimanyu.

Another son of Chandra or Moon god was the planet Mercury, he of gargantuan intelligence. In the Moon’s lineage, through his son Mercury, innumerable Kings and warriors of great valor have been born, including the greatest of them all, God incarnate on this Earth, Perfection Personified (Purna Purshottam), the Protector of the Cows, the Beloved of the Milkmaids:

Lord Krishna Himself, the eighth incarnation of Lord Vishnu.In Vedic numerology the number for Chandra or moon god is two. It is the second number and is best suited for creative professions. It is also very emotional and intuitive. Women to some extent naturally harbor this energy. 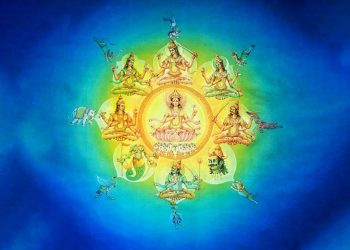 Bharat - the Ideal brother in Ramayan